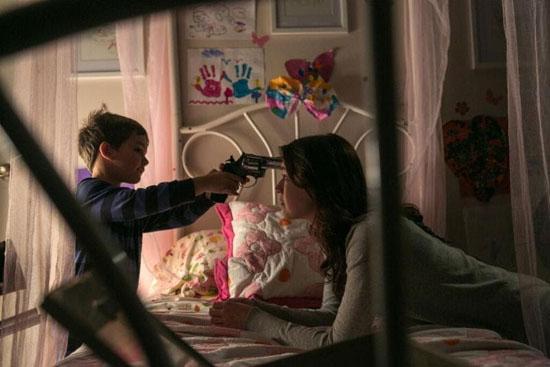 Set For a Spring 2016 Theatrical Release

In EMELIE, director Michael Thelin and writer Richard Raymond Harry Herbeck have taken an everyday experience – a couple handing their kids off to a babysitter – and created an original, nail-biting thriller. The Thompsons, a loving family living in a peaceful suburb of Buffalo, New York, are the definition of wholesome American normalcy. When their regular babysitter can’t make it, Dan and Joyce turn to her friend Anna to watch their three children while they go out to celebrate their anniversary. At first, the young woman seems like a dream come true for the kids, as she allows them to play with things that are usually off-limits. But, as her behavior becomes increasingly odd, the frightened kids realize her intentions are dark and twisted – and that she may not even be Anna at all.

MPI’s Greg Newman said of EMELIE, “With his first narrative feature, Michael Thelin proves to be a consummate craftsman, delivering a mature and thoroughly chilling and disturbing thriller that will stay with viewers long after it’s over.”

This acquisition comes on the heels of MPI’s and Dark Sky’s numerous successes this year, which include the theatrical releases of the critically acclaimed films Call Me Lucky,  We Are Still Here and Deathgasm.

Dark Sky Films is an independent film production and distribution label founded in 2008, working with emerging talent as well as established veterans to develop, package, produce and finance feature film and episodic television projects. Representing films from some of the most talented directors working today, such as Ti West’s The House of the Devil and The Innkeepers, and Jim Mickle’s Stake Land, Dark Sky continues to identify original talent and projects to bring a vibrant slate of films to the world market, with such recent productions as We Are Still Here, Deathgasm, Applesauce and Cherry Tree.