Blue Underground’s 2018 restoration of Lucio Fulci’s Zombie releases on 4K UHD today. Everything from the packaging’s embossed slipcover, to the incredible transfer of the film, to the miles of special features reveals that Blue Underground went all out in this release, making it the ultimate edition of Zombie for anyone’s collection.

A limited Blu-Ray edition of this package was originally available in 2018, but Blue Underground had to downconvert their impressive 4K 16- bit scan of the original 35mm camera negative to meet the specs of the Blu-Ray format. With the new 4K UHD edition, fans are getting every last detail of Blue Underground’s restoration, and it shows in nearly every frame of the film. Much of Zombie takes place during the day, and the disc presents every scene as crisp and clear as the day the film was shot. The image is consistently and naturally colorful. Skin, cloth, and special effects textures are detailed and lifelike throughout. Frankly, you haven’t seen many movies filmed during the late 1970’s—especially horror films that aren’t backed by the major studios—look this good on any format. 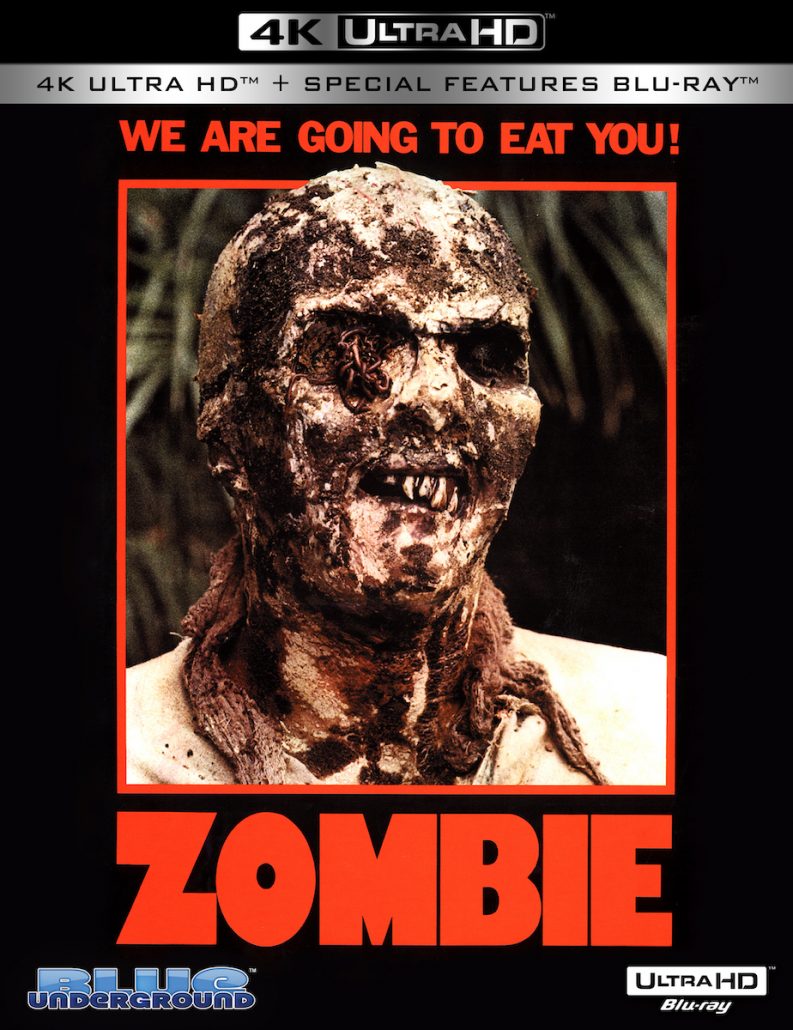 A major contributor to this disc being a visual knockout is the Dolby Vision HDR, which has been expertly applied to the film. The nighttime scenes offer deep blacks without crushing too much of the images, and a well-thrown molotov cocktail looks especially vivid against the shadowy scenery. The beautiful island scenery and nautical shots of the ocean look especially vivid with the subtle highlights HDR offers, and it’s clear that Blue Underground used it reasonably so as not to take away from the original presentation of the film. The infamous zombie vs. shark scene seemed like an obvious area to go overboard with gaudy HDR highlights, but the studio keeps it consistent with how you remember the scene, offering enhancements in detail while maintaining the murky coloring of the depths of the ocean. The HDR also boosts the various make-up and special effects imagery, offering an extra pop to the blood-red glisten that many of Zombie‘s scenes are famous for. It’s clear that this restoration was completed with a passion for the film, and cinephiles would be in heaven if the major studios took a few notes from Blue Underground on how to present their classic films in 4K UHD.

The 4K disc of the film includes multiple audio commentaries and an introduction from Guillermo del Toro. The package also comes with the Blu-Ray bonus features disc that was included in the 2018 limited edition package. This is where you’ll find all the interviews you’ll ever need from the cast, filmmakers, and production crew of Zombie. The second disc rounds out this package as the ultimate edition of the film, and there’s simply no better way to watch Zombie.

Readers may notice I didn’t begin by discussing the film. This is because I expect that collectors who are interested in picking up a 4K UHD copy of Zombie are already aware of every last detail of this infamously gory entry in early modern zombie filmmaking. For the uninitiated, Zombie is a very well made Italian horror film with an engaging plot, interesting characters, and excellent special effects for its time. While it obviously takes many of its cues from George Romero’s Dawn of the Dead, the film has numerous zany differences and it ends up breaking new ground in fleshing out what we all know and love today as modern zombie tropes and lore. You can’t call yourself a connoisseur of this sub-genre without having seen Zombie, and there’s no better time to see it than with Blue Underground’s impressive new 4K UHD disc.

Zombie is one of Blue Underground’s very first 4K UHD releases, and collectors have a lot to look forward to if this disc is an early sign of what’s to come from the studio. With Zombie, they have expertly harnessed the potential of the technology behind the new format to create an ultimate package of a film beloved by many, and fans should be bursting down doors like a hoard of hungry zombies to get a copy in their own hands!

“One Cut of the Dead”: The Horror News Network Review