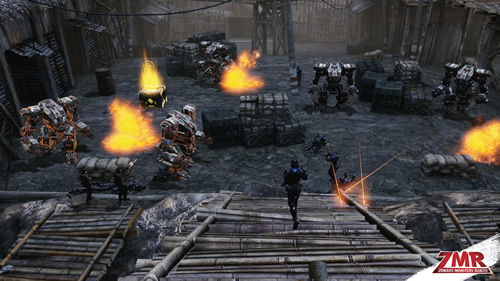 En Masse Entertainment, a player driven publisher focused on delivering great games and exceptional service, is pleased to announce that the successful North America open beta launch of Zombies Monsters Robots (ZMR) is just the beginning of what’s to come for the over-the-top, anything goes, co-op, third-person shooter for PC.

Following the release of the Mercs vs. Monsters update, which allows players to become one of over 20 enemies throughout a new PvP mode – and the debut of the Mummy See Mummy Doom update, which introduced six new maps with new enemies, bosses, guns, gear, and Blood Diamonds – a competitive mode where players race to kill opponents and collect diamonds to win – players can look forward to even more large scale content updates as they KILL EVERY THING.

Zombies Monsters Robots is an intense, third-person shooter that pits players against an unexpected assortment of enemies, environments, and game modes. The invention of portal technology has lured cross-dimensional creatures into the world, and humanity finds itself under attack. In ZMR, players will battle monstrous enemies and bosses across a wide range of co-op campaigns and wave-based survival missions and also fight other players in fierce head to head shootouts. With an arsenal of customizable guns and gear, players need to make every shot count as they enter a war against infectious zombies, abominable monsters, and murderous robots that will stop at nothing to see the end of mankind. This is the world of ZMR.