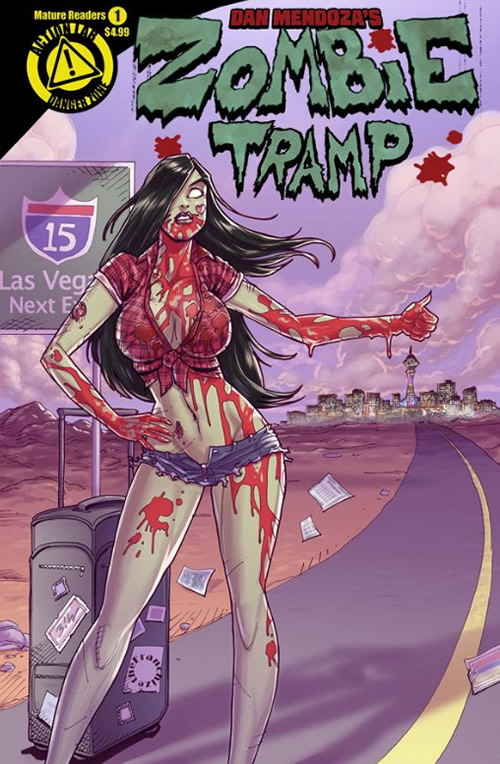 As Zombie Tramp prepares for another adventure, Stephanie Shamblin Gray caught up with creator/writer Dan Mendoza and new co-writer Jason Martin to talk about roots, relaunching, and the road ahead.

Stephanie Shamblin Gray: Let’s take it all way back to the beginning to start for readers unfamiliar with the book. Can you tell us a little about the story and the roots of this relaunch?

Dan Mendoza: The story is about a high-priced call girl named Janey Belle who one night was forced to sleep with a corrupt Sheriff to bail her transvestite Madame out of going to jail. Not knowing that he kept his Zombie son in the basement, and that Janey is ultimately meant to be food for him. Janey escapes but is first bitten and turned into one of the undead. When Janey awoke, she had so much rage inside of her from her messed up life that she retained her soul as well as new mystical powers. While this new ongoing monthly series is somewhat of a relaunch with a new status quo for our protagonist, it also picks up right where the previous story lines left off, and all of her history and all of the characters from the first two volumes are completely valid.

Jason Martin: I’d just add that on a broader level, the new series is about expanding on the character and world that Dan has created. You pick up right away when delving into this book that Janey isn’t your typical zombie, and that her story is more of a mythology with elements of the supernatural and similar to super-powered comic book characters. So having an ongoing series allows us to explore all of the fun things that can spring from setting a supernaturally powered zombie loose on the roadsides of America.

Stephanie Shamblin Gray: It’s great to see the collaboration now on Zombie Tramp with both of you. Can you tell us how that came about?

Dan Mendoza: Jason has been with me since the beginning. Through the years that I’ve known him, we shared the same interests when it comes to our love for horror, violence, and grindhouse. A lot of that shows in the comic book he wrote, Night of the 80’s Undead. It was only natural that when I signed with Action Lab that Jason would be heavily involved in Zombie Tramp.

Jason Martin: Yeah. I originally published Zombie Tramp via my Super Real Graphics imprint. So when I joined up with Action Lab to create their Danger Zone mature readers imprint, Zombie Tramp was very much something I hoped to bring along with me. And, as Dan said, with our similar sensibilities, I’m super excited to be able to help creatively on the book now as well!

Stephanie Shamblin Gray: Action Lab: Danger Zone seems like a perfect fit for Zombie Tramp. Can you tell us about the move?

Jason Martin: Action Lab mainly publishes creator-owned works, so we set up Zombie Tramp with Danger Zone in that facility, and reprinted the original first volume, as well as released the new second volume from Dan, both of which continued to do very well for an independent cult book. But he and I had often talked about continuing the series with other creators, to help realize the potential of the concept as a full-scale ongoing comic series, so we were able to set that up as one of the first Action Lab owned and produced properties in house. Bringing in more creators, like TMChu, to help take Zombie Tramp to the next level.

Stephanie Shamblin Gray: TMChu has done a great job on this issue. Dan, how does it feel to see another artist drawing Janey?

Dan Mendoza: I’ve been a fan of TMChu’s for a while now and when we were looking for artists, he was one of the first people I asked. I was very excited when he said yes. The way I feel about someone else drawing Janey is simple, to me its just like when another actor plays Batman, its different, but hey, its still Batman.

Stephanie Shamblin Gray: Zombie Tramp has been around since before the zombie apocalypse trend, but looks like it may be getting a boost from the trend based on the incredible amount of orders for the book. Can you comment on that?

Dan Mendoza: Zombie Tramp hit just at the right time I feel. The big zombie craze helped a lot to assist in her popularity but if it were vampires lets say that became the huge popular monster, I wouldn’t have made a book called Vampire Tramp. She was always meant to be a zombie, but more on the ghoulish side. I wanted to make an iconic character like Freddy and Jason Voorhees.

Jason Martin: Getting the new first issue stronger sales then we’ve ever seen, personally, for the book, or even for Action Lab, is great. I don’t so much attribute it to the zombie zeitgeist, as much as building on what we’ve accomplished with the book, and having a Free Comic Book Day edition to help to launch the new series. It’s allowed Action Lab to position the book in a stronger light than we’ve had before, which is great, because we really think the new book has come together so well all around. People will see it’s not just a sexy zombie capitalizing on trends, there’s a whole mythology, and unique approach behind everything we’re doing here, from the art, to the writing… it may be low brow, but it’s not mindless, we’re all committed to doing fun, genuinely inspired comics here! That’s the great thing about this medium, you’re allowed to go as crazy as you want, and Zombie Tramp is the perfect book for that.

Stephanie Shamblin Gray: Anything you can tell us about what Zombie Tramp has in her future?

Dan Mendoza: My mind is full of Zombie Tramp stories, but I can’t reveal anything as of yet. Just be on the look-out for re-occurring characters from the original volumes.

Jason Martin: I’ll add a bit more here. With me coming on to help co-write the book, one of the things that we’ve done is worked at length to start mapping out story arcs, characters, and ideas for the book. We naturally figured out that Las Vegas was a great place to start from, and the first story arc is set there. But the series is about Janey moving forward, and learning more about her powers, so you’ll see her continuing to do that. Facing new supernatural foes in iconic locations, and as Dan mentioned, building on the cast that have already been introduced; like the voodoo queen Xula, or red-headed ghost girl Morning. It’s going to be a wild ride!

Stephanie Shamblin Gray: Thank you both, and good luck with the book!