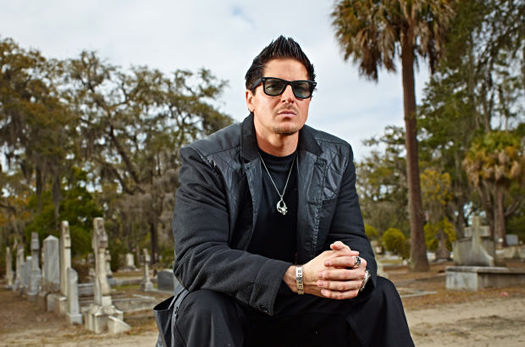 Zak Bagans Opens Up on “I Am Haunted”

Zak Bagans Opens Up on “I Am Haunted”

Recently Sr. Editor, Christine Caprilozzi spoke with Zak about his new book, “I Am Haunted,” his spiritual connections, and how paranormal investigations have changed his life.

Horror News Network: First off, I want to ask about the very personal nature of “I Am Haunted.”  You really open up and are very candid about not only about Ghost Adventures, but also about your life. What made you want to be so open?

Zak Bagans: I just feel I want to share my personal experiences with everyone bbecause it’s just so real for me. I’ve been doing this for so long and I feel like the fans and Ghost Adventures viewers have stuck around so long that they have grown with me.  Those that have been there from the beginning have seen a transformation in me as an investigator and as an onscreen personality/host.  I just feel like I owe them to be so candid and to open up on a personal level.

I basically just wanted to open up and let everyone know how this job affects me, and that it’s not just a “job” to me.  I’m not just hired to play the part of a paranormal investigator, this is real. The anatomy of Zak Bagans has a real connection to energy and really spiritual energy.  I suffer from the ramifications of over exposing myself to this energy. I also wanted to let people know how my body has been affected by doing this for so long in the way that I open myself up to the spirits. Also, how investigations went from me go around and taunting spirits, and maybe not really knowing what I was doing so much, to the “now” Zak Bagans.  The “now” Zak Bagans has a very delicate respect for spirits. Through my experiences and how my body feels I have developed this sympathetic side of me dealing with the spirits.  This profession…the spirits chose me to do this, I didn’t choose it. The book is about that, but it’s also about me just being me.

Horror News Network: In your book you talk about being an empath. I wanted to ask about the mental/psychological impact, on you since you are an empath, and since you are extremely sensitive to different energies? (Note: an empath is a person who is capable of feeling the emotions of others despite the fact that they themselves are not going through the same situation)

Zak Bagans: I’m glad you asked that.  Being an empath and being empathetic means I have a higher sensitivity to energy than most people. Sometimes it’s almost an embarrassment you know.  I can watch a video on Facebook and be an emotional wreck afterwards. When interviewing someone on “Ghost Adventures Aftershocks,” I could be interviewing someone and feel them getting nervous.  I just connect with people’s emotions in a higher level than normal people to the point where I can feel the exact same level of emotion the other person is feeling. I can start crying with them, getting nervous with them.  It’s something that I’ve developed over the years and understand that this is just how I am.

With that, having that gift or condition and being a paranormal investigator, I’ve felt myself connecting with spirits and feeling their energies.  This higher sensitivity while investigating gives me these lockdown hangovers. It’s the weirdest feeling in the world. Investigating and connecting on that type of level with spirits emotions leaves my body in an aftershock once that spirit leaves and is gone. That’s something that has really been wearing and tearing. That is really trying to understand what my body is going through that experience once the spirit leaves.  When I am in a spiritual encounter, I can’t choose when that spirit leaves me. It takes me a whole to re-calibrate my body, since it can be a roller coaster of high emotions that I feel. I t seems almost that the spirits can sense that about me.

Just recently during an investigation with Dr. Barry Taff, who is one of the top Parapsychologists in the world and a pioneer, he was able to use scientific equipment and measure the moment that a spirit was around me and my energy levels.  He said my magnetic energy levels were way above what most human levels are, and when the spirit came around, he was able to capture this sense.  So it is a very real thing I live, and sometimes I worry about the ramifications of overexposing myself to this process.

Horror News Network: Well that is one aspect of what you do that stands out.  You’re not just dealing with spirits and peoples energies, you are basically going into places where suffering and atrocities took place, so how intense is that?

Zak Bagans: If you were try to visually represent it, it would be the spirit standing next to me physically and grabbing my arm and not letting go. During that time there’s this energy transfer going on, and I can’t escape it. It’s really draining.

Horror News Network: As I said earlier, there are some very personal insights to you in this book.  When you say you listen to Alice in Chains “Nutshell,” which is a very deep and dark song, after an intense lockdown, it’s striking. Do you think because of all the psychological energy expended is making you become a bit darker or more reclusive?

Zak Bagans: Yeah, I think I’ve become a bit more reclusive. I mean, I am not in a state of depression; it’s just dealing with the residual effects of dealing with some powerful spirits that leave me a bit reclusive and exhausted. I will listen and connect to that song, and I get really sad thinking of how he touched my life and other’s.  Just hearing the emotion in his voice, I can almost feel the pain.  I connect with his voice, not with what his fate was certainly.  The more I do paranormal research, the more I fnd out how life is mysterious, and that I learn more through death than life. But no, I’m not a depressed person. I’m just fascinated by death, and fearful of it.

But, I love what I do.  I’m skeptical going into investigations, but I’m a big believer in spirits. After I do the investigations and have experiences and evidence, we like to debunk a lot of stuff.  There’s no rush like it in the material world.

Horror News Network: Well, to follow up on the debunking…with the success of  “Ghost Adventures,” I’m guessing that there are some pitfalls.  In the book you reference certain investigations that were a bit disappointing.  Do you find now that you have to sort of research and “vet” the investigations more and more since people may just want their 15 minutes on TV, and the place not really have any spirits?

Zak Bagans:  Yeah, we actually just had an investigation recently where we didn’t find any evidence at all. Typically on our investigations we go to places where there is some sort of dark history, like you mentioned.  We go to locations where we know is haunted because of its history.  Whether there’s an intelligent spirit there or residual haunting, that’s still classified as a haunting.

We find claims where people want to draw people to their establishment.  We investigated a place in South Carolina called the Gribble House, which is talked about in the book. I felt that they were doing some sensationalizing of the location to draw people.  So yeah, we run across that. However, the places you see on “Ghost Adventures” all have dark histories to them.

Horror News Network: What kind of toll it takes all this take on you physically? For example, your investigation in Bridgeport, CT of the old Remington building left you with asthma.

Zak Bagans: That  was a scary one, and is in the chapter of the book titled “Risks.” There are paranormal investigators that have died after investigations.  I’m just trying to raise awareness that it is a dangerous job because most of it takes you into places where there are all sorts of contaminates.  I’ll always do this though regardless of what it does to me.

Horror News Network: Can you talk a bit about “The Demon House,” and give us an update on the filming? Where does that documentary stand right now?

Zak Bagans: That stands as probably the most powerful investigation of my entire life. I have never, ever come across a case where there are so many credible eyewitnesses to a haunting in my career in paranormal investigating.  It’s just amazing what is going on in that house! I do believe there are demons at work right now; I don’t think it’s a coincidence that I ended up buying that house. I have a strong feeling I was called to investigate that place.  We actually just wrapped production on that. I did feel a responsibility to deliver on that since it hit the media real quick.

I know Hollywood is making a movie about it, but what I am going to deliver is a very raw journal documentary. It will be the most powerful work I’ve ever done. The police there call it the “Portal to Hell.”  It has a negative effect on almost everyone who enters that home. I witnessed a mother in there with her children.  She used to live there and really wanted to go in.  I did let her know she was entering at her own risk, I said I didn’t think it was safe and that it was an open investigation. She forcibly wanted to do it, so I let them in. I witnessed the mother get kicked down the stairs by an unseen force in the basement and they left the house immediately.  A couple days later, the mother gave me a call and said that since the incident at the house, her daughter was not herself and was at that point in the ER.

That let me know that there was some serious stuff going on here, and we shut down production for nine months. But, production has wrapped and the documentary should be out later this year.

Horror News Network: Thanks so much for your time Zak!

“I Am Haunted” comes out February 10th and serves not only as a cautionary tale for aspiring paranormal investigators, but also a peek behind the scenes into the growth and spiritual journey of Zak Bagans.   Whether you’re a fan of “Ghost Adventures,” or just interested in the paranormal, the book is a must read.