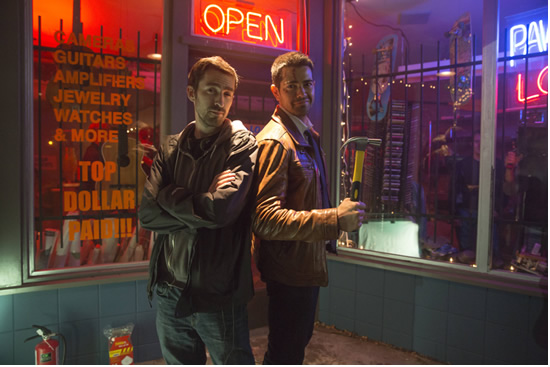 On March 27, Crackle will premeire the new based-on-the-game film “Dead Rising: Watchtower.” HorrorNewsNetwork’s Brian Gray caught up with director Zach Lipovsky to discuss the challenges of adapting a video game to film, getting paid to play games, and of course, the best way to kill zombies.

Brian Gray: We gotta ask: What is your zombie killing weapon of choice?

Zach Lipovsky: I have a deep love for the entire saw family. Nothing like the sweet sound of a gas powered spinning blade wether its a sledgesaw, or a paddlesaw, or chainsaws on bike handlebars. It’s all good. Its pretty hard not to feel bad ass. The one downside is you need gas, so its not a good weapon if you need to survive in the long term.

A katana is probably a good backup if your zombie apocalypse seems like its going to last more than a week or two.

Brian Gray: What was the biggest challenge of adapting a video game to a movie?

Zach Lipovsky: It’s the same challenge that comes with adapting anything. Finding the balance between being true to the source material and the fans, while changing it enough that it works as a film, and can be enjoyed by newbies.

Luckily everyone knows what a zombie is, so I didn’t have to explain that, but efficiently explaining Zombrex, the Dead Rising history, and the “type” of zombie without bogging the film down was tough. I showed the film to a lot of friends who had played the game, and friends who hadn’t. Each time I thought I had the perfect balance, then had to go back and tweak it until it worked for both.

The cool thing now, when either group of people watch the film they say “I want to go play the game now”, So I took that as a good sign we adapted it well.

Brian Gray: Were you a fan of “Dead Rising” before starting filming?

Zach Lipovsky: I had watched a lot of “lets plays”, but hadn’t played myself. I mostly play RTS on my computer. I’ve now played the hell out of all 3 games. The funny thing was that when I was a kid my mom never let me have a console no matter how much I begged her, and when I got the job to direct the film we where shooting in my hometown, so I stayed with her.

I had this amazing moment of coming home with an Xbox, plopping it down in the living room and declaring once and for all she couldn’t stop me because I was being payed to play this game. She sat down with dinner and watched me kill hundreds and hundreds of zombies. She quickly told me “Thank god I kept this away from you, there is absolutely no way I would have let you play this as a kid.”

Brian Gray: At the risk of spoilers, how closely are you following the game?

Zach Lipovsky: The cool thing we’ve done with the story of the film is it actually takes place inside the cannon of the story world. The film tells the story of what happened between DR2 and DR3. Zombrex goes from being an injection in DR2, to a chip that the government mandates everyone have implanted in DR3. So we focus on telling the story of how and why that happened.

Brian Gray: What about fitting in characters from the game?

Zach Lipovsky: I was very excited to have Rob Riggle play Frank West. I think he so perfectly embodies that character. People are going to be begging for more of him, and I hope we get to revisit that. General Hemlock plays a small cameo in the film, and I hope we get to see more of him later. There are homages and winks to a lot of other psychopaths and hero zombies throughout the film.

Brian Gray: Anything else you would like to tell our readers about the film?

Zach Lipovsky: One of the best things about Dead Rising is it’s a fun zombie world. So much of what is being made right now in the zombie genre is so serious and dark and boring. This is a wild ride, with crazy weapons, bizarre unique zombies, totally grotesque kills. I think people are going to have a lot of fun with it.

There is also a 5 minute one-take zombie killing spree in the middle of the film that I think people are really going to dig. We spent an entire day practicing and filming it to get it right, and it really captures the fun of playing the game.

Brian Gray: Thanks, Zach, and good luck with the film!

Synopsis (Wikipedia): “Dead Rising: Watchtower” is an upcoming American-Canadian action horror zombie film directed by Zach Lipovsky and written by Tim Carter. The film stars Jesse Metcalfe, Dennis Haysbert, Virginia Madsen, Meghan Ory, Keegan Connor Tracy, and Rob Riggle. It is based on the video game of same name, principal photography began on September 30, 2014 in Vancouver, British Columbia. Legendary Pictures is producing the picture as its first digital film through its Legendary Digital Media division and it will be released on Crackle on March 27, 2015.