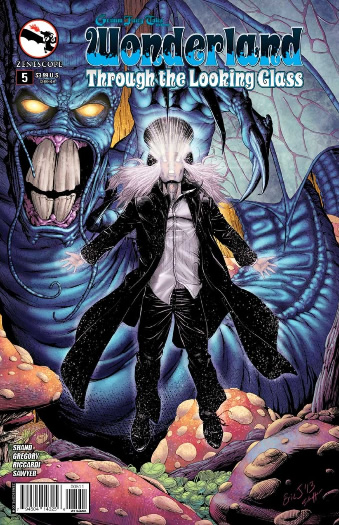 Wonderland: Through the Looking Glass #5 Review

Synopsis: The Queen of Spades, The Jabberwocky, and Keres all have been leading Johnny toward his eventual destiny as the Mad Hatter. Will Johnny Liddle be able to escape his prophesized future, or will he embrace his dark fate? The saga of Johnny Liddle concludes here!

Issue #5 of Wonderland: Through the Looking Glass is the mini-series finale, so this review serves a little more as review of all five issues as opposed to just the one. Johnny has always been my favorite character in the Wonderland universe and while Gregory has sworn never to bring him back to life he has certainly treated us to a view of the life that Johnny had. The Wonderland: Through the Looking Glass mini-series unfolds after Johnny’s sister, Calie, shoves his psycho ass through the looking glass and into the realm of Wonderland. If you have never read any of the Wonderland tales, this series is not the place to start. If you are already a fan of the Wonderland universe run right out and pick up this mini-series!

What we get in this entry is a look inside Johnny’s head and even his heart. We knew he had been a victim that became a monster, but this story shows his transition to where he finally embraces his inner Mad Hatter. Gregory and Shand to a great job of showing Johnny’s inner conflict with morals versus insanity. We also meet Adina, another person trapped in Wonderland, in an earlier issue and get a glimpse of the potential for her to ground Johnny. This version of Johnny with a heart that might be other than cold and black goes a little against other versions we have seen, but it is Johnny’s story and additional depth is allowed. Of course, this isn’t a love story so we all have a good idea of how this potential love affair will end. I will avoid spoiling anything, but the twist in this unfortunate love affair will resonate throughout the Wonderland universe.

Zenescope always has it’s cross-over characters. Often they fit perfectly and add depth to the story; other times it feels a little forced. Death’s (Keres’) role in this mini-series falls into the latter category. While she will no doubt play a larger role later, it is not clear why she is in the position she is in here right now. That said, her interactions with Johnny are actually fascinating and sexy even by Zenescope standards.

Long-time readers of the Wonderland books will not be surprised that the book ends with Johnny wanting to track down his sister Calie for some revenge as this is essentially where the entire Wonderland universe started. Hopefully, the Zenescope crew will find a way to bring us a little more of Johnny’s story. His preparation and search for Calie would make another great series. As a Johnny fan-girl, I may be biased when I say this is one of the better stories in the Wonderland franchise. Anyone following Wonderland currently needs to read this, but I would also highly recommend this series to anyone who has read any of the earlier Wonderland tales.