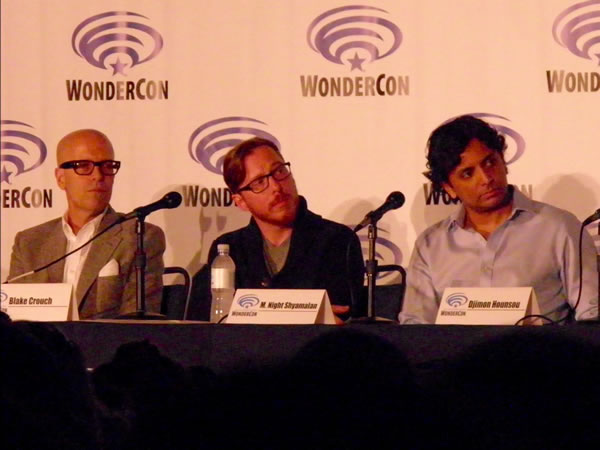 With great pleasure I attended the “Wayward Pines” panel at WonderCon 2016 in Los Angeles. I was a fan of the first season since watching the pilot screening at last year’s WonderCon. I was especially happy to see that M. Night Shyamalan was going to be on the panel. I’ve been to several conventions and panels for his projects, but this is the first I have seen him at a convention. I will say right away that he needs to do more! He was a great and entertaining speaker that really livened up the panel without overshadowing the others speakers. If you are wondering if he will make one of his frequent cameos in the show like he does in his movies don’t hold your breath. None are currently planned.

This is a horror site so let’s start with the obvious: the Abbies, a.k.a. the Abnormals. From the featurette that was shown, the Abbies are back and are more prominent and bigger than before. And when I say bigger, I mean physically BIGGER. They seem to have searched out body-builders for many of these roles. This can’t be good for our Wayward Pines residents. When author/producer Blake Crouch was asked about the Abbies, he described them as “devolved humanity…repulsive yet familiar” and noted that he wanted to show where humanity could be headed.

As you may or may not know, the first season covers generally all of the material from the original trilogy of books. Crouch noted that they were able to mine addition material from the books, but much of it is being written only for the television show now. He and Shyamalan have worked out a storyline that will take us through three seasons and Shyamalan stated that “everything is aiming toward an endpoint”. That something to be happy about for fans of the show. Unfortunately for fans of the books, Crouch is not writing a fourth book for the series and may not ever.

Jason Patric and Djimon Hounsou look great as the new cast. They appear to be a very good fit for the story and Shyamalan and Crouch even noted that they had them in mind while writing the characters.

Something freeing about shifting time in a television show is the ability to play with the lives of characters. The producers let us know to expect to see characters that we may think are dead from last season.

During the Q&A when a fan asked for them to give us a detail about the upcoming season we might miss, Crouch told us to watch the Abbie’s very closely and that when we see an Abbie on Main Street will will know that Wayward Pines is about to take a huge turn in fate. I suspect this will be not so good for the residents, but great for us viewers!

WonderCon Synopsis: Join stars Jason Patric (Rush, Sleepers) and Djimon Hounsou (Blood Diamond, Amistad) and executive producers M. Night Shyamalan (The Sixth Sense, The Visit), Donald De Line (Green Lantern, The Italian Job), Ashwin Rajan (Devil, The Visit), and international bestselling author/executive producer Blake Crouch, for a sneak peek at the second chapter of this psychological thriller events series. Season two picks up with the residents of Wayward Pines battling against the iron-fisted rule of the First Generation. Jason Patric portrays Dr. Theo Yedlin, a new resident of Wayward Pines, who awakens from suspended animation and finds himself in the middle of this rebellion as he tries to understand what Wayward Pines really is and help preserve the endangered human race. Hounsou portrays CJ Mitchum, an original resident and a historian for the town with extensive knowledge of its complex origins, and the one person who can provide a unique bridge between the current world of Wayward Pines and the previous world that humans inhabited. Produced by Twentieth Century Fox Television, Wayward Pines returns to FOX this summer.