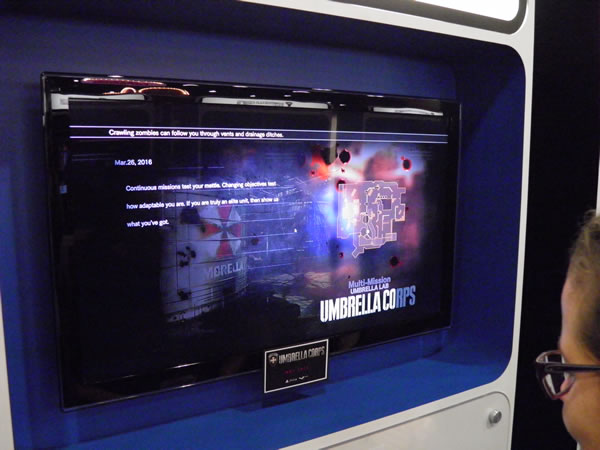 March 26, 2016. Today we stopped by the Capcom booth at WonderCon in Los Angeles to get a little hands-on time with the upcoming Umbrella Corps. This game exists in the Resident Evil universe, but plays very differently than our usual Resident Evil action-horror games. This is a very fast-paced, multi-player, third-person shooter that will keep you on your toes!

Something that you get used to surprisingly quickly is that your character is wearing a device to hide from the zombies. What this means is that you don’t have to worry about the zombies, unless your opponent shoots you in the back where the device is located. If that happens, you will likely be mauled and eaten by zombies while trying to run from the people shooting at you. Sheesh!

There is also a very fun melee weapon called the “brainier”. Using this will launch into a gory animation of, well, brain-ing your opponent. I tried it on zombies, but didn’t get the same effect. Now, I must confess that I play very few multi-person shooters. I’m just too slow. But the game looks great and has some fun tweaks and features as mentioned above. Because there is no story-mode, this game will have a lower price point at around $30. Available for PS4 and PC, this is sure to popular with any fans of the Resident Evil games that also like shooters as well as anyone who likes variety in their third-person shooters.