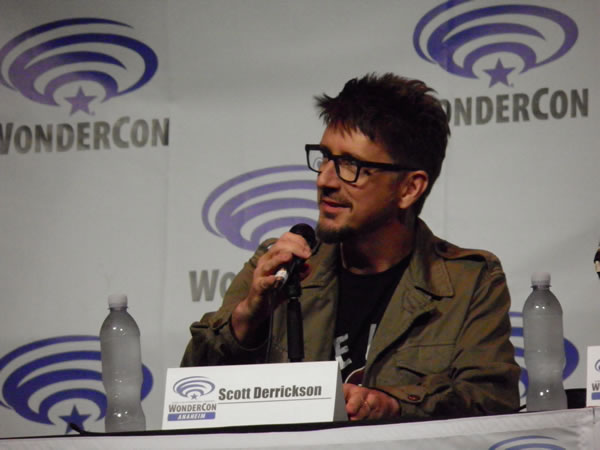 WonderCon 2014 Panel – Deliver Us From Evil

Just like The Conjuring at last year’s WonderCon, we have a panel for a horror movie based on a true story, Deliver Us from Evil. This panel had a great showing of people involved in the film with director Scott Derrickson, producer Jerry Bruckheimer, and actors Eric Bana, Edgar Ramirez, Olivia Munn, and Joel McHale, and moderated by Chris Hardwick. This movie is part procedural and all creepy! It also looks like it may be a good crime-drama as well as horror movie. Edgar Ramirez mentioned he remembered watching The Exorcist by ‘accident’ as a kid and couldn’t sleep alone for two years. He wondered aloud why he did that to himself again with this movie. Tapes of exorcisms were viewed for background and distressed the cast. They tried to warn Olivia not to watch, but she watched anyway and stated the story and the tapes made her a believer. When Derrickson was asked by an audience member why he seems so drawn to exorcism stories, he said that he is drawn to them because unlike zombies and werewolves, exorcisms are a fact and notes that a good exorcism movie makes you think that the world is more magical and mystical than it appears.

For his character research, Eric Bana chose to just watch Ralph Sarchie, the person his character is based on, and not ask him questions. Interestingly, Sarchie was also the “cop adviser” for the film and was on set. Other items of note were when Scott Derrickson called Joel McHale a “functioning sociopath” and they all had a lot to say about McHale’s giant knife collection. Derrickson said in response to a question about how much CGI was in the movie, “If you can shoot real, it will look better.” Amen to that! In theaters July 2.

WonderCon Synopsis: This supernatural thriller, inspired by the bone-chilling real-life cases of New York police officer Ralph Sarchie (Eric Bana), follows a detective who begins investigating a series of disturbing and inexplicable crimes and joins forces with an unconventional priest (Edgar Ramírez) schooled in the rituals of exorcism to combat the frightening and demonic possessions that are terrorizing their city. Join director Scott Derrickson (Sinister, The Exorcism of Emily Rose), producer Jerry Bruckheimer, and stars Eric Bana, Edgar Ramírez, Olivia Munn, and Joel McHale for questions and an exclusive first look at the film.