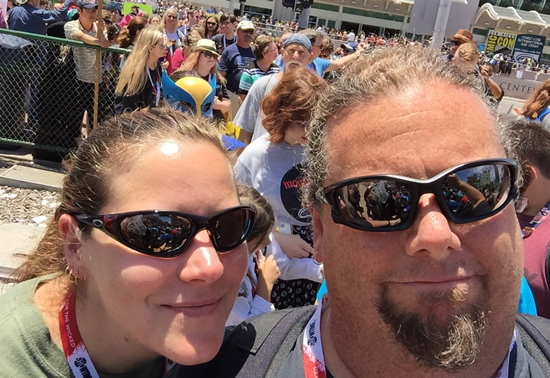 February is Women in Horror Month. Since the HNN ladies spend their time interviewing and promoting others, we felt that this is a perfect time for us to interview them!

Up next is HNN staff member, Stephanie Shamblin Gray…

Stephanie Shamblin Gray: A long time! It’s been just over seven years now. I started back when we were only covering horror comics. I remember that I was so stoked to find ComicMonsters.com because I didn’t know anyone else who liked horror comics. I knew right away that I wanted to be a part of the site and contribute. I get so much more enjoyment out of art when I get a chance to analyze it.

Horror News Network: Do you recall your first experience with the horror genre? (Was it watching a movie, etc?)

Stephanie Shamblin Gray: I don’t remember my first experience, but I remember my first impactful experience. I liked horror movies and my older brother took me to the theater to see “The Amityville Horror.” I was nine and this was only the second movie I saw in a theater, the first being “Winnie the Pooh”. I was hooked and horror has been my favorite genre ever since.

Horror News Network: What is your favorite medium for horror? (Books, movies, etc?)

Stephanie Shamblin Gray: I can’t say that I have a favorite. I listen to horror story podcasts in the car, I read horror novels in bed, watch a horror TV show in the evening, and try to catch a horror movie and catch up on some horror comics on the weekend. I haven’t had as much time to play videogames lately, but otherwise the time and enjoyment of the others is probably about the same. I may lean a little more to the podcasts because listening to screaming and terrible things while driving distracts me from letting the road rage in.

Stephanie Shamblin Gray: I’m going to cheat a bit here and say the Evil Dead movies. All of them. I even like the remake, and I generally despise remakes. I’m so glad to see that there is now a TV show to love, also!

Horror News Network: What TV shows are your current favorites?

Stephanie Shamblin Gray: Believe it or not, my favorite TV show has been “Supernatural” for over 10 years. Although not particularly scary, I am a sucker for the witty, monster-of-the-week formula and this show nails that perfectly. As you would imagine I was a huge “Buffy” fan when it was on.

Some other favorites are probably a little more predictable, like “The Walking Dead” and “American Horror Story.” Those are not only great shows, but they are actually changing the way we watch TV. The watching-live event of Walking Dead and the annually changing story of AHS are two things I wouldn’t have believed possible five years ago.

There really are so many great shows now! It’s gotten to where I have to pick and choose because there are literally too many to watch. This really feels like the Golden Age of horror TV to me.

Horror News Network: Girls read comics, yes. But, how many girls actually read HORROR comics? Tell us about your fascination with the genre.

Stephanie Shamblin Gray: This is where we really do thin out the numbers of women. Women reading ANY comics are on the low side and I’m having trouble remembering any instances of bumping into other female fans of horror comics. It’s that scarce.

My interest in horror comics started interestingly enough because of my husband, Brian, who also contributes to this site. He used to watch “Attack of the Show” on G4 when it was still around and Blair Butler used to rave about this really awesome comic called “The Walking Dead”. This was about ten years ago, maybe. Neither Brian nor I were ever comic fans but Blair’s enthusiasm got him wanting to check it out. So we went to the comic shop where the show was actually filmed to buy that comic and look around. Do you ever have those moments where you think “where has this been all my life?” That was how I felt in that comic shop. That day I bought the comic adaptation of the “Anita Blake: Vampire Hunter” series, “30 Days of Night,” “The Walking Dead”, “The Darkness” and had to just quit picking up comics because I was finding too many! I’ve been hooked ever since and I always wonder why more fans of horror, women or men, don’t gravitate more to horror comics.

Horror News Network: What are your thoughts on the current state of horror?

Stephanie Shamblin Gray: I think this is a fantastic time to be a fan of horror. The accessibility and variety are just unprecedented. Whatever you are into you can find somewhere. We have a very different problem than we did 20 years ago. We used to have to wait for something cool to come around. Now, we have a remarkable amount of horror entertainment available that may or may not be to our liking and we have to sort through it all. You find a lot of very average stuff, but when you find that gem it’s a thrill that you can’t wait to tell everyone about. Between the feast and the famine, I will definitely choose the horror feast!

Horror News Network: Do you feel that being a woman in horror has its advantages?

Stephanie Shamblin Gray: Speaking for myself and as a member of the press, I have not seen being a woman as either an advantage or a disadvantage. I definitely see more men covering events I go to as press, but I feel that we are treated equally. Here at Horror News Network, we have Christine in a leadership position and a good ratio of women-to-men with much respect all around.

Regarding other opportunities for women where we don’t usually see them like writing screenplays, directing, etc., that’s a little harder to answer. I would like to think that it is advantageous to bring a woman’s voice to fields that have been more traditionally dominated by men, but I can’t tell yet if the women newcomers are being welcomed or oppressed for their point-of-view. I hope that they are welcomed and look forward to seeing more women in many different roles in horror.

Horror News Network: Thanks for your time, Steph!