As part of the spotlight this month on women in horror, The Horror News Network had the honor of interviewing Ania Ahlborn, author of Seed, The Shuddering, The Bird Eater, Within These Walls, Brother, and other horror titles.

Horror News Network: Tell me a little about yourself.

Ania Ahlborn: My name is Ania Ahlborn. I was born in Poland but have lived in the United States nearly my entire life. I grew up in Albuquerque, New Mexico (If you’ve seen Breaking Bad, it’s an absolutely accurate representation of “the 505”), I’ve lived in Portland, Oregon for a couple of years, and I’m now solidly mired in the Deep South, which is both a blessing and a curse.

Horror News Network:: When did you realize you wanted to be a writer?

Ania Ahlborn: I was tenish or so. My discovery was born of boredom. My cousin and I were summering with my grandparents and had nothing to do, so we started writing stories together. It was a fleeting hobby for her, but I was hooked.

Ania Ahlborn: Not at all. I started with standard pre-teen gushy romance stuff that eventually evolved to coming-of-age stories. I stuck with that for a long time—all the way through college, actually. I’ve loved the strange and unusual since I was a kid, but I didn’t drop my own horror mic until well after I graduated college.

Horror News Network: How would you describe your writing?

Ania Ahlborn: I’ll just stick with the descriptors my readers have tossed out over the years: Cinematic. Tragic. Heartfelt. Brutal. I’ve been referred to as The Dutchess of Despair. I take it as a compliment. No happy endings here.

Horror News Network: What obstacles do you think women in horror writing face and how do you think they can be overcome?

Horror News Network: What do you like to do when you’re not writing?

Ania Ahlborn: I’m a full-time toddler mom, so “free time” is, like, a wistful memory of days long gone. Just the other day I asked my husband if he remembered when it was just us and there was no pandemic; we could go out, do whatever we wanted whenever we wanted, could travel to far-off places like it was no big deal? God, it’s enough to make a girl weep. Anyway! As the world currently stands, I love keeping up with the new horror movie releases. I indulge in just about any well-made true crime documentary I can find. I read. I bake with the kid. I’m a big fan of naps. I enjoy my weekly Times of COVID trip to Costco. You know, the usual…

Horror News Network: What is one of the most surprising things you’ve learned through creating and bringing to life your books?

Ania Ahlborn: Don’t count on anyone to help you write it. When I was writing Within These Walls, I needed quite a bit of information on how supermax prisons worked. For example, how big are the cells, what do the prisoners wear and how are those clothes labeled, etc. Like, if I was to snap and commit horrendous crimes, would I be comfortable? Do they even have coffee, or would I die from dehydration? I started reaching out to wardens. Let’s just say I ended up doing my own research (which was surprisingly difficult to do). And no, I wasn’t jokey with them. Purely professional. Alas, I was pretty disheartened to learn just how unhelpful folks could be. That makes me sound jaded, right? I mean, that’s just one experience. Maybe prison folks are just grumpy. Maybe they hate authors. Whatever, wardens. I hate you, too.

Horror News Network: What has influenced you most as a writer?

Ania Ahlborn: If you pick up one of my novels, you’ll notice I’m pretty referential. Stephen King comes up a lot. So does music—The Cure, New Order, Guns N’ Roses… I’ll throw around movie titles, TV shows. When it comes to consuming media, I’m like a sponge. Nearly everything influences me in one way or another. Places factor into that equation as well. A week-long trip to Louisiana changed my life. You can see that reflected in my first novel, Seed. New Orleans has never left me. I guess I let myself become haunted by a lot of things…

Horror News Network: What is the strangest habit you have as a writer?

Ania Ahlborn: The Shining (1980). I can’t pass up a viewing, and I’ve written countless hours of prose to the soundtrack. I even have a hallway runner in the style of the Overlook’s iconic carpet, because of course I do. Why wouldn’t I? The Witch (2015). Some people love it, others hate it. I think it’s bleak and brilliant and I’d love to have a pet goat named Black Philip, which would undoubtedly irk my brother, who is also named Philip. The Conjuring (2013). Firstly, I have a major crush on Vera Farmiga (who doesn’t?), but in an era of lousy jump scares, The Conjuring just delivers. It has atmosphere. The acting is solid. The story is creepy. And, you know, Vera Farmiga… It’s Women in Horror month, right? We girls have to stick together, and Vera is just…*chef’s kiss* 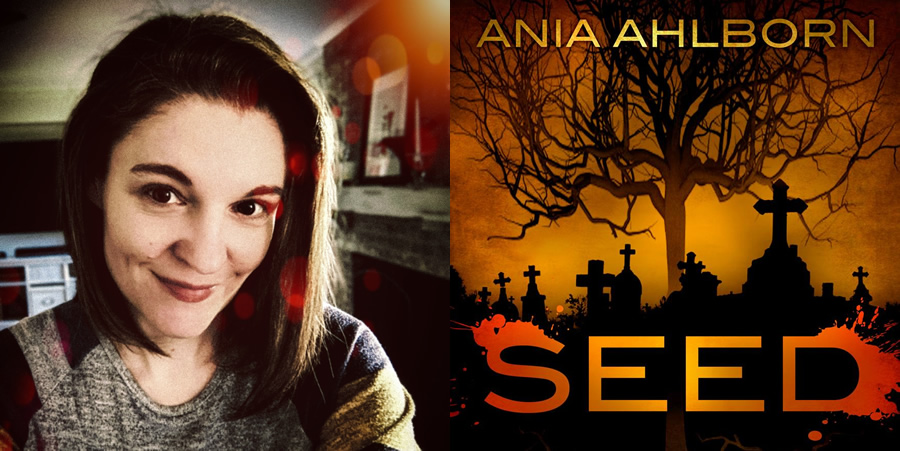 HNN: Thanks so much for taking the time for this interview!

If you’d like to learn more about Ania Ahlborn’s work, or keep up with what’s new, visit her website at http://www.aniaahlborn.com/ or her social media outlets https://www.facebook.com/aniaahlborn https://twitter.com/aniaahlborn