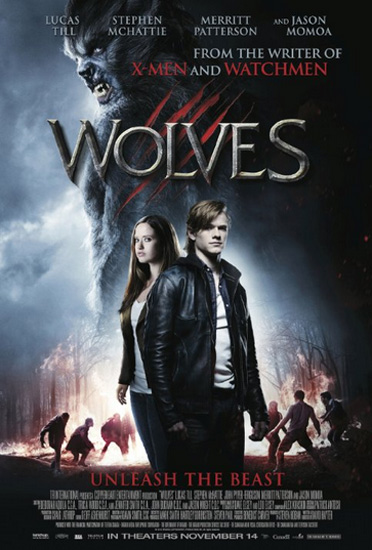 Synopsis: A boy is trying to find out about his family history and stumbles upon a town of lycans.

Our Thoughts: ‘Wolves’ is an entertaining werewolf genre film. Although a bit cheesy at times, it manages very good practical effects and an interesting story line with more wolves than most werewolf centered horror films.

Cayden Richards is a young lycan who has to flee his home when he murders his parents while in wolf form. He ends up in a town full of lycans, whom he finds his real family among and a twisted hierarchy  of wolves under the the thumb of a powerful wolf named Connor. Connor has a gang of wolves who hold the town hostage to his will. The gang scenes were reminiscent of of ‘The Lost Boys’, while the first half of the film reminded me of the ‘Teen Wolf’ TV series from the 1980’s. The story itself has the tragic undertones and romance, most similar to that of the ‘Underworld’ films.

The most interesting thing to me about the wolves in the film is the way those born as much differ from those turned wolf when bitten. Those turned are much less powerful and don’t fully transform, showing only some wolf characteristics, while those born transform into full half wolf-like creatures. I found this to be a nice change of pace for a film with lycans. Normally those bitten would fully transform as well. Another interesting aspect is that the wolves can transform at will, or when their passions are aroused, and do not need a full moon. The purebreds can also heal themselves while in wolf form. The silver bullet lore was taken out of the equation for this spin on lycans, and they can be killed in many ways, the same as humans. However the purebreds are able to survive a lot more than the turned wolves.

The film’s weak point is it’s low budget CG, however it’s practical effects are excellent. The bloody action was enough to keep me interested, as well as Jason Momoa’s (Game of Thrones, Conan the Barbarian) standout performance as bad wolf Connor. Lucas Till (X-Men: First Class, X-Men: Days of Future Past) was also great as the confident, young wolf Cayden. Stephen McHattie (300, The Watchmen), who plays John Tollerman, also gives a memorable performance. While it’s not the greatest werewolf film I’ve ever seen, its definitely one of the more entertaining ones. Jason Momoa fans and lycan horror fans alike won’t want to miss ‘Wolves’.