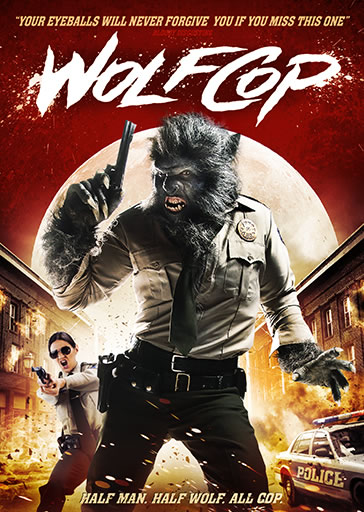 Image Entertainment, an RLJ Entertainment (NASDAQ: RLJE) brand, announces the release of the cult horror film WOLFCOP, written and directed by Lowell Dean (13 Eerie) and starring Leo Fafard (Corner Gas: The Movie), Amy Matysio (Lawrence & Holloman), Jonathan Cherry (Final Destination 2), Aidan Devine (Outlander) and Sarah Lind (Severed). WOLFCOP will be available on DVD for an SRP of $27.97 on March 10, 2015. The blu-ray is available exclusively at Best Buy starting March 10, 2015 for an SRP of $29.97.

Officer Lou Garou isn’t the best cop in small-town Woodhaven – in fact, he’s probably the worst. He mostly just looks to avoid anything that could possibly interfere with his goal of getting wasted. One evening during the night shift, Lou investigates a mysterious disturbance at the edge of town and wakes up with a pentagram carved in his chest, heightened senses and body hair that’s growing at an alarming rate. To solve the mystery of his transformation, he’ll have to take on a case no normal cop would be able to solve, but this half-man, half-beast is not just a cop…he’s a WOLFCOP.

The blu-ray and DVD will also include over 2 hours of hair-tingling bonus features. Learn more about the half-man, half-cop in “Wolfcop Unleashed” Behind the Scenes Full-length Featurette. Witness “The Birth of Wolfcop” as he transforms from the pages of a script to the big screen. Plus hilarious film outtakes, a Wolfcop music video, the original concept trailer, film commentary with Writer/Director Lowell Dean and Special Effects Artist Emersen Ziffle and more!