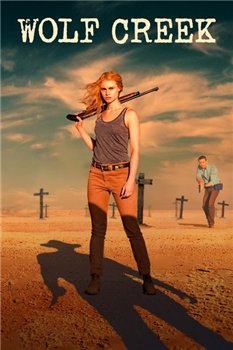 Wolf Creek The Series To Premiere on POP in October

Pop, in conjunction with Lionsgate Television and Zodiak Rights, will be giving the popular horror movie franchise Wolf Creek the small-screen treatment beginning on Friday, October 14th.  Reprising his role as the tourist-murdering, territorial villain Mick Taylor will be John Jarratt (Australia, Django Unchained).  Wolf Creek has already spawned two movies (2005 and a sequel in 2013), with the third cinematic installment having recently been announced as being under development.

Unlike the films, the upcoming television series on Pop will focus on the hunter being the hunted, as a former victim of Taylor’s killing spree returns to exact revenge.  College student Eve Thorogood, played by Lucy Fry (Vampire Academy, Hulu’s 11.22.63), escapes the murder of her entire family in the Australian Outback and begins stalking Mick Taylor to avenge her family.  The six-episode series will focus on Thorogood’s journey from victim to retribution, if she gets that far.

The Wolf Creek movies have amassed a large fanbase since the first film premiered at the 2005 Sundance and Cannes Film Festivals, and would subsequently become a global box office success (as well as achieve cult film status).  Jarratt’s portrayal of Mick Taylor has been hailed as sick, sadistic, and brilliant.

“WOLF CREEK is a binge-worthy, premium revenge tale that we are thrilled to bring fans at the perfect time of the year,” said Brad Schwartz, President, Pop. “To turn everything you expect from a horror film around and hunt the psychopath through a strong and singularly-focused female protagonist is thrilling to watch. It is probably the scariest series to ever premiere on basic cable and will have viewers hooked 13:40 minutes into the first episode.”

WOLF CREEK the series is produced by Screentime (a Banijay Group company), in association with Emu Creek Pictures and financed with the assistance of Screen Australia and the South Australian Film Corporation.  The show will begin its six-episode run on Pop TV beginning on Friday, October 14 at 10:00 PM, ET/PT. 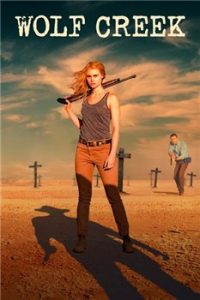