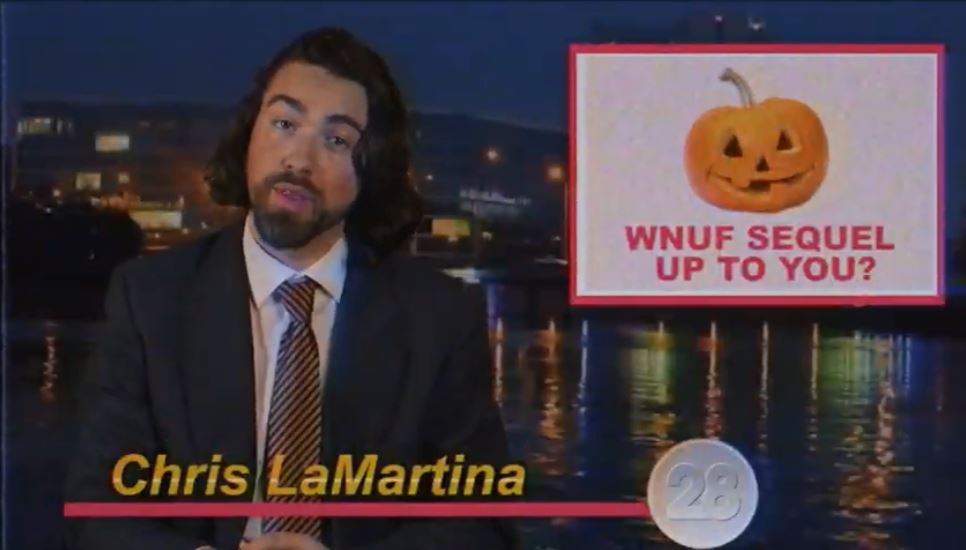 A little over four years ago, I stumbled across a DVD titled WNUF Halloween Special. This film plays itself as a lost VHS recording of a live Halloween newscast from 1987 complete with grainy “taped-over” VHS quality and wacky 80’s commercials; you can check my 2014 review of it by clicking here. It’s really a fun, clever film that I always recommend to folks looking to add something to their Halloween viewing; I even included the trailer for it before we showed Halloween 3: Season of the Witch at the Strand Theater here in Connecticut a few years back.

Now Chris LaMartina, writer and director of WNUF, is making a sequel – and he needs our help! I’m definitely throwing some bucks in as I want to see a sequel to the original but I also wanted to catch up with Chris to let him explain to you why you should chip in as well. Check it out:

Horror News Network: Hey Chris, let’s start out with you. You’ve been involved in horror as a writer/director of indie film for over ten years now. How did it all begin?

Chris LaMartina: For as long as I can remember, I’ve been drawn to the strange and spooky. As a little kid, episodes of “the Real Ghostbusters” led me to dictate “scary stories” to my godmother. She’d sit down at the typewriter and knock out these goofy little tales of cliched non-sequiturs. She was (and still is) a very superstitious Italian Catholic and she’d tell me these insane stories about the saints when we’d go visit our relatives in the cemetery every Friday. I was learning about stigmata when other kids were watching Sesame Street.

As I got older, I stumbled upon the family camcorder and started producing my own horror stories every day after school. At the same time, I’d discovered punk rock and the idea of doing it yourself paired with horror movies just made sense. Over time, I’d seen so many terrible DIY horror flicks that I thought, “Y’know, I could probably make something just as terrible!”

So, since 2006, I’ve been writing, directing, and producing scrappy little DIY horror movies… including the slasher satire, “President’s Day” (2010) and the Lovecraft love letter/horror comedy, “Call Girl of Cthulhu” (2014). Outside of directing horror movies, I’ve worked in marketing and advertising as a Creative Director or Director of Storytelling for several mid-Atlantic-based agencies. Besides that, I run an oddities museum, Dr. Gloom’s Crypt of Curiosities located here in Baltimore, MD and I’m available for parties.

HNN: What/who were your inspirations?

CL: I grew up watching monster movies. but the moment when I realized I wanted to make them was at age 9 or 10 when I saw my first low budget horror flick. It was exciting because it broke down the mystic of “making movies”. It’s like when someone hears the Ramones for the first time and you go, “oh shit. I can learn three chords and start a band”. The SOV titles of the 90s made me grow as a filmmaker more than any Spielberg movie did. Perhaps that sounds insane, but J.R. Bookwalter, Eric Stanze… those were my cinema heroes and they inspired me to do whatever it took to make my first few flicks. To this day, I try hard to stay up to date on the latest no budget gems. It’s getting harder and hard because the algorithms bury anything without financial backing, but it’s important and you have to make the effort to hear new voices.

CL: The first feature script I wrote was a terrible anthology called “Dead Teenagers” and that was the first feature I finished. It was written piece-by-piece, segment-by-segment because it was an anthology, which was good because I was just testing the waters to see if I could make something longer/more elaborate. Don’t seek it out, though. It’s not very good. I was still learning!

HNN: Did you just use friends/family as cast for your first film or did you actually audition folks? What was the process?

CL: For the “Dead Teenagers”, it was all friends and family. For “Book of Lore”, we held auditions at this small punk show space/collective a. In the end, about half the cast was people we know previously and half fresh faces. Since then, we’ve always held auditions unless there are roles we’ve specifically written for an actor. Still, to this day, family members who can act do make it into the movies. My Dad is Governor Barlow in WNUF, actually.

HNN: In 2013 you released the WNUF Halloween Special which has become an underground classic, tell me first how the idea came about.

CL: The origin of WNUF is really two fold. It had been a year since Jimmy George (my frequent co-writer/co-producer) and I had made a feature and I was getting itchy to direct again. We knew we didn’t have the time or budget to make a full blown feature and my movie, “Witch’s Brew” (a dark comedy about cursed beer) had left us pretty drained. It seemed like a found footage movie would be the only way we could do something new because it wouldn’t be as much of a commitment. The problem was that we (mostly) hated found footage movies. So, I sat down and rifled on everything I despised about the sub-genre. Through this process, I came up with unique solutions on how to combat my issues with common mistakes in other movies we would be compared to. Quickly described, here’s those challenges and our solutions.

CHALLENGE: Why do folks keep filming after insane things happen to them?
SOLUTION: Maybe they HAVE to film. Maybe they’re being paid to film and if they stop filming, there goes their livelihood.

CHALLENGE: Found footage movies are so monotonous. One location. Minimal characters.
SOLUTION: We needed to break it up and that’s when the idea of actual commercial breaks hit me.

CHALLENGE: The conceit of found footage dies when a film is released with a UPC code. No way it’s real, right?
SOLUTION: For the first months of release, you could only get WNUF on vhs tapes with a white spine label and handwritten title… and for the very first few months, we attempted a whisper campaign by driving around and leaving VHS tapes at thrift stores and horror conventions.

The whisper campaign worked very well. New York Times ended-up covering it as well as NPR, Vice, and MTV. It was pretty incredible and honestly, I didn’t expect it… at all.

HNN: The commercials that are jammed in there were genius, whose idea were those?

CL: I knew to make it feel genuine, it needed commercials and to be accurate, it needed a LOT of them.

HNN: How long did filming take?

CL: Principle photography was very brief. All the Webber House stuff was 2 or maybe 2 and half days. Total (considering all the news segments), it was definitely less than ten, but I can’t remember an accurate number.

HNN: Did you anticipate the kind of response you got with the film?

CL: Fuck no. WNUF has been this beautiful gift that re-blooms every October. I’ve just started to realize how unique of an experience it really is. Traveling the country for screenings or stumbling across folks sharing their love for it on social media, it’s an honor. My favorite part of it is how people get excited or laugh at different moments or characters. The movie is really a potpourri of seasonal kitsch and it’s rad to watch an audience find what works for them specifically. Additionally, I love when fans make their own art for characters in the movie. I’ve seen Frank Stewart action figures, Frank Stewart “video games”, and a ton of artist renditions. It’s very special!

HNN: WNUF did the 80’s retro thing long before it took off. Is it safe to say that Stranger Things and the IT remake took their inspiration from you guys? Hahaha.

CL: Ha! I don’t think so. In fact, I believe the retro 80s thing has been going on since the early 2000’s, but it’s just gotten more traction in the horror scene and eventually that bubbles up to the mainstream. There’s no way WNUF is the harbinger of that. That’d be cool, but nah… no way.

HNN: Now we’re looking at a sequel – when and how did the idea of a sequel first come about?

CL: Right after WNUF was finished editing, I was a bit melancholy because I knew those characters and that universe weren’t over for me, Even back then, I had ideas for a sequel and over the past two years, I’d started to research and pull resources for the “next chapter”. I didn’t want it repeat the same story, but rather, explore how media changed going into the 1990’s. I’ve been a bit tight lipped about what the sequel’s story is about because I want it to be a true surprise. Bottom-line: it’s not a reboot or remake. It will take place in the 1990’s, but there will be returning characters and not just who you’d expect.

HNN: Who is returning with you as far as writers/directors/cast that you can mention?

CL: I’ll be writing/directing with a tiny tiny pool of writers/guest directors (probably under 6 folks) who will do some individual spots. As for returning characters, they are: Officer Bookwalter, Veronica Stanze, Dentist Stanley Allen, Donna Miles, Gavin Gordon, Deborah Merrit, the Bergers…. And Frank Stewart.

HNN: You mentioned that the sequel will take place in the same universe but this time in the 90’s – any more hints or gems you can give us?

CL: The best way I can describe it without giving away too much is… Imagine if Jerry Springer hosted an episode of “Sightings”

HNN: You’ve got an active funding campaign going to help with production of the sequel – where can folks find that?

HNN: What kind of perks are there for backers?

CL: For modest prices, you can get DVDs and special thanks in the liner notes. For higher backers, we’re offering your photo or voice in the film, bit roles, and even associate producer credits. Plus literally the only time we will EVER release the VHS version of the sequel will be during the campaign. So if some tapeheads are dying for a cassette copy, now’s your only chance!

HNN: Why should lovers of the original film back this sequel – pitch it!

CL: The story isn’t over and if you fell in love with the original, if it’s become an October tradition in your home, you’ll want this movie to exist. I’ve got some real fun and wild stuff up my sleeve. And hell, if you have the means, you could be IN this flick for a few hundred bucks. That’s pretty incredible! Simply put, I’m just really excited to make a movie with all the folks that helped the original become such a success.

HNN: Anything you’d like to leave our readers with?

CL: I’m an approachable guy and I love interacting with other creators on social media. My handles are below. The best way to get involved with the sequel is to back the GoFundMe first (even the smallest bit helps!) and then hit me up on Facebook. Thank you guys so much for covering the campaign and the film. It means a lot and I sincerely appreciate it. Xo

HNN: Thanks for your time, Chris!

That’s it folks – head over to the GoFundMe link above to donate and help get this thing made – and grab some sweet perks!