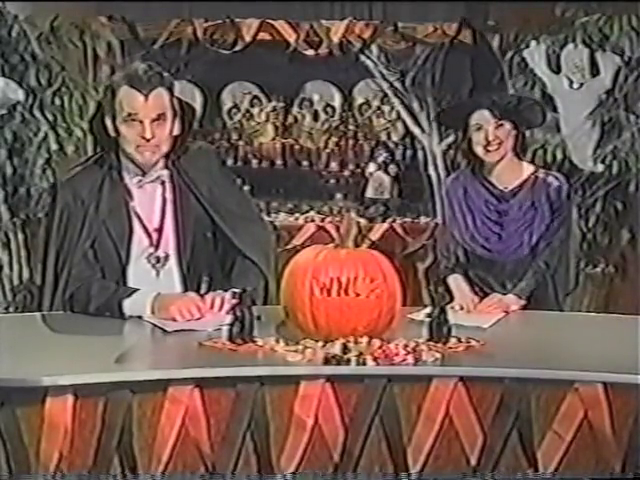 I’m sorry to say that I have to begin this review with somewhat of an apology; I am truly and deeply sorry that it took me so long to view and review this little gem of a film. I only first heard about it a few short months ago and just got around to giving it a watch this past weekend.

Let me start by saying that if you’re a child of the 70’s or 80’s, who grew up watching grainy VHS horror films and takes delight in the cheesiness of the commercials from that era, you’re in for a real treat.

The WNUF Halloween Special plays itself as a lost VHS recording of a live Halloween newscast from 1987. I was immediately sucked in from the opening blue screen that said “Play” in small letters in the upper-left hand corner; whisked away to a time when my VCR’s were prominently displayed by my television and not in a box somewhere in the basement. I use the plural of “VCR” because anyone who was there knows that you needed two so you could record all of the horror movies that you rented from the video store! Back to the film…

Part “found-footage” and part “mockumentary”, we open on a news set where the male and female anchors are dressed for Halloween and their studio is festooned with every decoration imaginable, including a jack-o-lantern with “WNUF” carved into it. We’re warned not to change that dial because we are, in fact, watching their special Halloween broadcast! Along with the set decorations, the crew at WNUF have whipped up a special treat; they tell us that we are going to witness a live seance at an abandoned house where a few murders took place 20+ years ago.

We’re introduced to Frank Stewart who is their “man on the street”-type reporter and will be taking us into the house along with two older paranormal investigators who my Connecticut friends will easily recognize as caricatures of famed paranormal investigators Ed & Lorraine Warren. In between segments with Frank and the folks in the studio, we’re treated to tips from an “Officer Friendly” type on Halloween do’s and dont’s along with a creepy interview with some religious nuts about the Satan/Halloween correlation.

I won’t go any further into the plot because spoiling the experience is not my style and this is one you guys need to watch for yourselves. For me, the real treat here are the commercials. None of them are legitimate commercials from the time period but you would never know it. They are so perfectly corny that they fit the 80’s feel of the Halloween Special perfectly. I also love the way that they weave the commercial breaks throughout the broadcast when things get a little dicey.

I highly suggest you head over to Alternative Cinema and pick yourself up a copy of this clever little film.