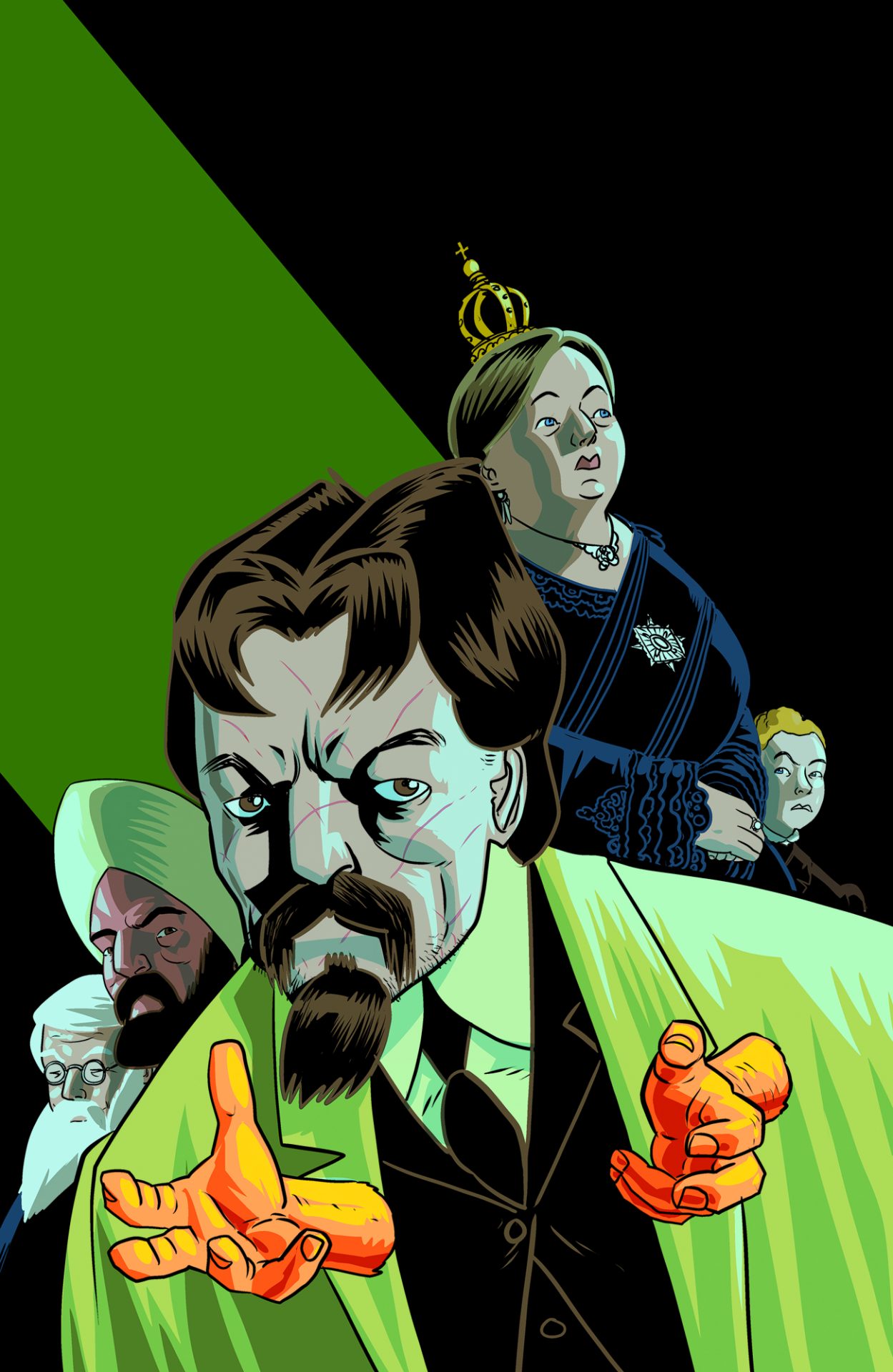 Chris Roberson is no stranger to Dark Horse Comics Mignolaverse and he has become one of Mike Mignola’s chief writing partners on such titles as Hellboy and the B.P.R.D. 1954, The Visitor, and the recent hit Rasputin: Voice of the Dragon.  Roberson was able to take some time out of his schedule to discuss his latest entry in the Mignolaverse, as well as his memories of working on his Vertigo series iZombie (which enters its fifth season on the CW this fall).

Chris Roberson: Sir Edward Grey, occult investigator in the service of Queen Victoria, becomes aware that a series of arcane artifacts have gone missing, often in connection with strange deaths and disappearances. As he continues his investigations, he discovers that he is not the only one working in the shadows of Victoria’s England, and there are far larger issues at stake than he realized.

HNN:  This series opens up Grey’s cast of characters and injects him into a larger supernatural community.  How does he interact with some of his new colleagues and rivals?

Roberson: Many of the new characters representing different factions and varying philosophies on dealing with the supernatural and the occult. Sir Edward will find that he while he doesn’t agree with any of them entirely, he disagrees with some more than others, and that it can be helpful to have allies at your side when dealing with world-threatening dangers.

HNN: Witchfinder has always taken place on the periphery of the Mignolaverse.  Does this series bring him into it further?

Roberson: Over the course of The Gates Of Heaven we’ll be introducing characters and concepts that connect Sir Edward’s corner of the Mignolaverse to other corners of that world, both geographically and historically, while at the same time pulling the curtain back a bit to reveal that there is a lot more going on in the Victorian era than Sir Edward ever imagined. 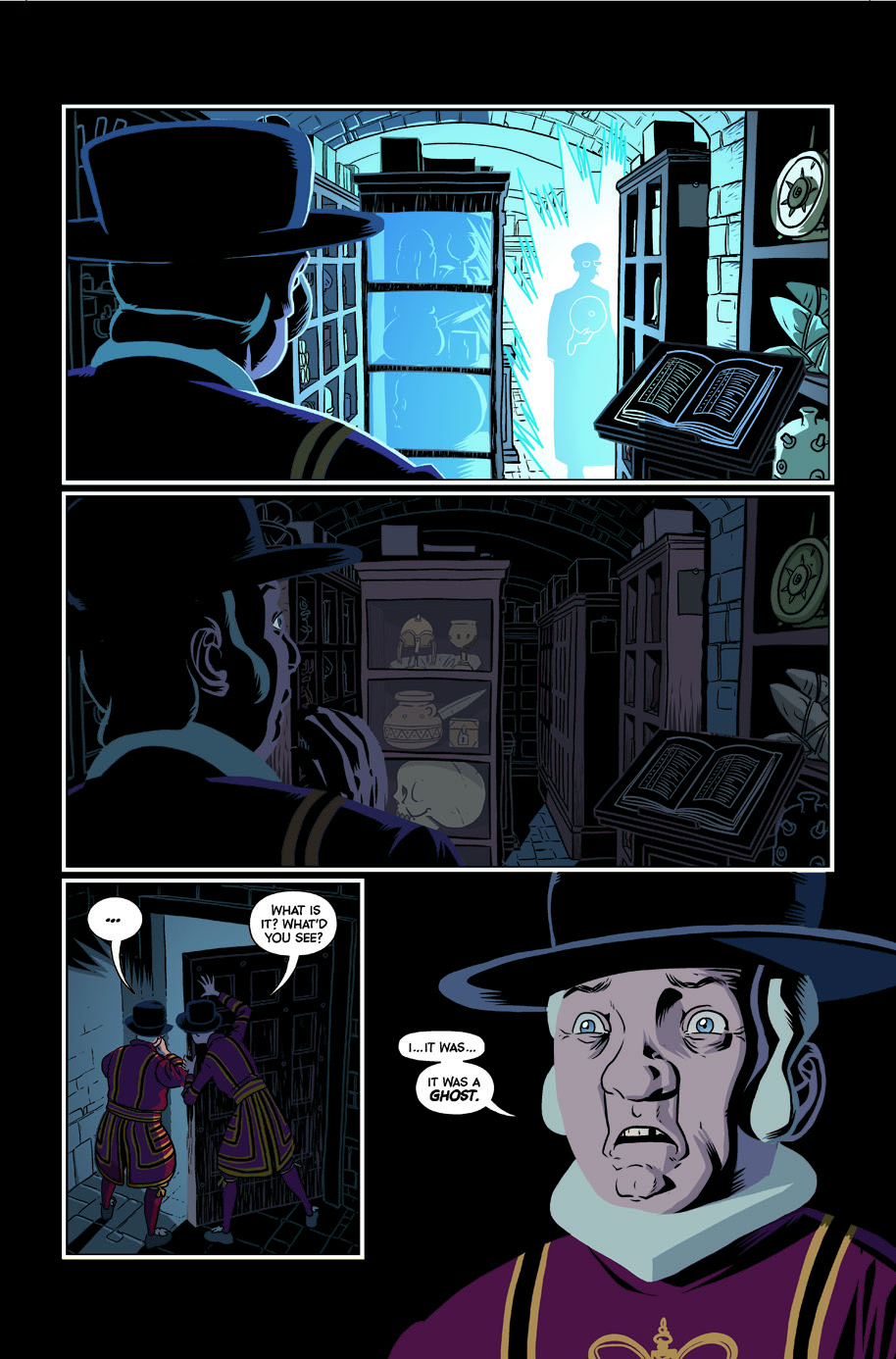 HNN: Is this the first time that you worked with artist D’Israeli?  What does his art add to your scripting?

Roberson: Yes, this is my first time collaborating with D’Israeli, though I’ve been an avid fan of his work since I first saw it in the pages of Deadline almost thirty years ago. From the earliest discussions about the ideas that eventually developed into The Gates of Heaven, we knew that (a) the story would be set in Victorian London and (b) that there would be a steampunk-tech aspect to it. And D’Israeli was the first name I suggested to Mike when we started talking about who might handle the art duties, as I knew that there was no one better equipped to handle that setting and era while also suited to tackle the steampunk vibe we were going for. And thankfully I was right, as the pages have turned out looking amazing!

HNN:  Your Hellboy and the BPRD: 1955 collection will be released in June.  What is like telling Hellboy stories from this era as opposed to more modern tales?

Roberson: The advantage is that I’m able to approach all of these stories as period pieces, and can look for ways that the historical era and the geographical setting suggest story possibilities. What was happening at that moment of history that might be interesting to explore, or what about a particular location is evocative? And it’s usually not the big or obvious historical moments that prove to be the most useful, but smaller, more quiet moments that are much more fun to explore.

HNN:  iZombie was just renewed for its fifth (and final) season.  What are your memories of working on the comic with Mike and Laura Allred?

Roberson: There were many things to enjoy about working on that series, but probably the highlight was the opportunity to collaborate with Mike and Laura Allred, who in addition to being a phenomenally talented artistic duo, are also some of the nicest and most charming people you could ever be lucky enough to meet.

HNN: Any upcoming projects that we should know about?

Roberson: In addition to various miniseries set in the world of Hellboy, I’m doing another work-for-hire comic gig that hasn’t been announced yet but which is really cool, and in my free time I’m working on a YA prose novel.

Witchfinder: Gates of Heaven #1 will be released on Wednesday May 23 and look for the Hellboy And The B.P.R.D.: 1955 graphic novel collection on June 6.