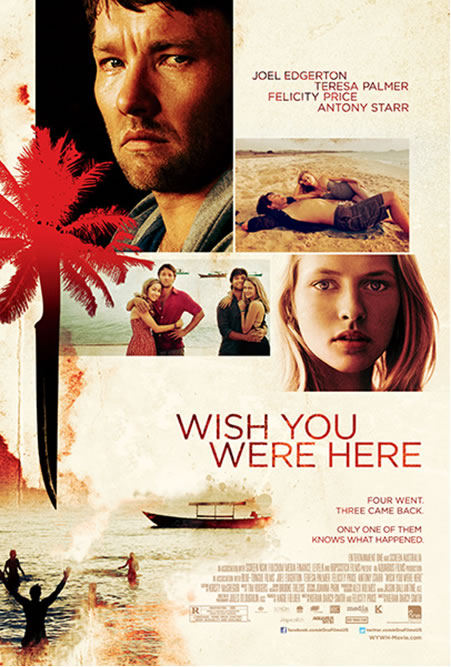 Wish You Were Here Coming to DVD in September

We received word today about the official DVD release date for Wish You Were Here. Read on for the official details:

As four friends indulge in a carefree Cambodian holiday, their sun-soaked retreat quickly takes a horrific turn when one of them disappears. Does one of the remaining friends hold the answer to the fate of their lost companion?

Screen veteran Kieran Darcy-Smith (Animal Kingdom) makes his feature directorial debut with this ambitious non-linear drama centering on a group of Australian friends whose lives are irreparably changed after one of them goes missing during a spontaneous vacation in Cambodia. Alice (Felicity Price) and Dave (Joel Edgerton) are about to become new parents when they agree to join Alice’s little sister Steph (Teresa Palmer) and her new beau Jeremy (Anthony Starr) on a sun-soaked trip to Cambodia. Their tropical retreat quickly turns bad, however, when Jeremy vanishes without a trace. As the investigation into Jeremy’s disappearance begins to reveal the nefarious motivations behind their trip, the remaining three struggle to carry on with their lives in Sydney amidst the threat that even more damning details will emerge.
Visually stunning, WISH YOU WERE HERE was shot on location in Sydney and Cambodia and, following its world premiere opening night at the Sundance Film Festival (2012), was released theatrically in the U.S. in 2013.