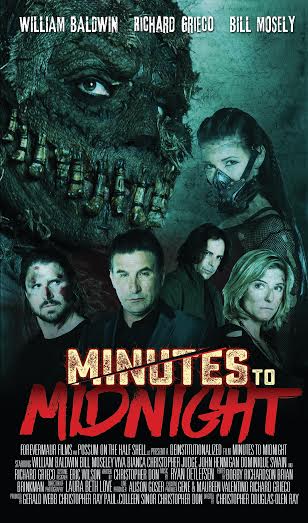 “It’s Past Your Dead Time!”

The film’s story begins on New Year’s Eve. A celebration is under way in a remote cabin. But, there are those who are on the hunt. Now, the party guests are being stalked by a masked group, who act maliciously and even murderously. Few will survive this night of terror!

This is DeInstitutionalized LLC’s second horror production. Their original release, A House is Not a Home (2015) starring Aurora Perrineau, Bill Cobbs and Richard Grieco has garnered multiple awards. Established by Christopher Ray and Gerald Webb, DeInstitutionalized continues to produce the best in horror. Webb says of Minutes to Midnight and of the film’s action: “too many times we see people run but not truly fight for their lives in horror movies. Our villains fight, our victims fight and our heroes fight to the sick twisted end.” The end will come soon enough, but this is just the beginning for Minutes to Midnight.

ForeverMaur Films and Possum On The Half Shell, LLc are presenting the   DeInstitutionalized, LLc produced Minutes to Midnight.

Official Synopsis: “On New Year’s Eve, seven friends visit a ski lodge to celebrate the New Year. But before midnight can strike, they are systematically hunted down by a group of demented masked murderers whose cryptic agenda is more diabolical than anyone could ever imagine.”