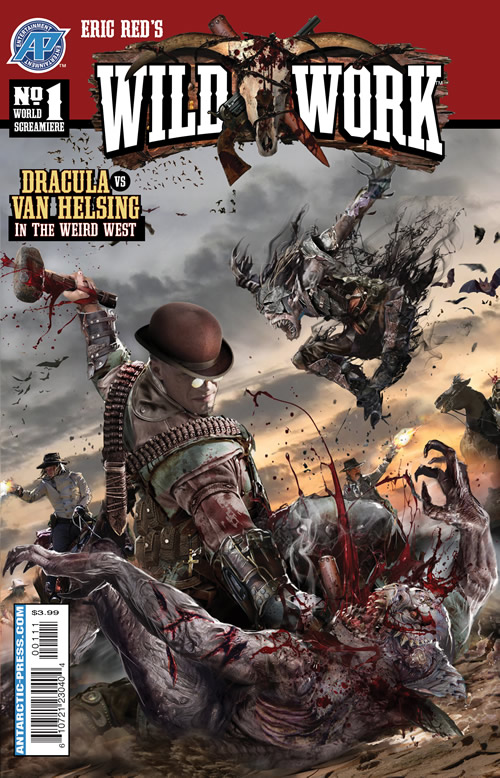 In 1888, Professor Abraham Van Helsing pursues Count Dracula into the American West. Wooden stakes and spurs, silver bullets and six-guns, side by side. Bullets fly, there’s Hell on Earth around every hitching post, and enough blood is spilled to turn the western desert into a crimson sea. It’s going to be one Hellsing of a ride!

We caught up with writer, Eric Red to talk about his upcoming title Wild Work from Antarctic Press.

Horror News Network: Can you talk a bit about coming up with the concept of this book being set in the American West?

Eric Red:  The battle between Professor Van Helsing and Dracula always felt to me like it was out of a western with a bigger-than-life good guy and bad-guy in a epic showdown. Certainly Christopher Lee and Peter Cushing’s ongoing battle in the Hammer Dracula films series was very western-like. The argument can be made that Bram Stoker’s novel is a disguised western set in Europe with supernatural elements. Anyway, I thought transplanting the fight between Dracula and Van Helsing to the actual old American west offered possibilities for a spectacular mash up. You have the sun going up and down inescapably in the desert, battles on steam trains, vampires wearing homemade armor, cowboys with silver bullets, fantastical weapons, all with these two classic horror figures at the center. It’s a very Steampunk arena. For over a year, I did a lot of work with illustrator John Gallagher doing concept sketches and tableaus of WILD WORK and I can’t give John enough credit for visualizing this vivid world and horrific creatures, bringing the whole thing to life. John did the covers for WILD WORK and Ben Dunn did the artwork.

Horror News Network: What can we expect from your versions of Van Helsing and Dracula?

Eric Red: Professor Van Helsing is a wonderful iconic character in the book and films, and this comic stays true to the Peter Cushing version. He’s a proper English gentleman in a suit and bowler hat, kind and well-mannered, but a fierce warrior when he shifts into vampire slayer mode. In the story, when he comes to the west he is a fish out of water with all the cowboy roughnecks, so there’s some funny stuff that happens.

Dracula is as far from the elegant aristocrat version in the tuxedo and cape as you can get in the comic. He’s a bloodthirsty king who wears spectacular medieval armor that has been savagely retrofitted with razor sharp blades all over the suit. The armor also functions to protect him from daylight in the wide-open spaces of the old west here. Dracula here has many elements of the historical Vlad the Impaler, and impaling his victims on wooden posts is his technique of choice.

Dracula is released into the Arizona territories of the 1800’s by accident when train robbers hold up the train carrying his coffin. He’s a king and wants to turn the west into vampires, so for him it’s a frontier like it is for the humans. Van Helsing hot on his heels s and the stage is set for an grand saga where the good doctor must recruit a team of cowboys who don’t believe in vampires to fight the hordes of the undead.

Horror News Network: You are of course well known for screenwriting and directing talents that are on showcase in the movies Near Dark, The Hitcher, Bad Moon, 100 Feet and more. How does writing a comic differ from writing a screenplay?

Eric Red: Writing a comic is like writing a screenplay that includes the director shot list or storyboards. You have to write out all the panels and tell the story with pictures. A screenplay involves dialogue and action description but never camera angles—you leave that to the director. In a comic script it’s all camera angles, so to speak. But the storytelling is pretty similar.

Horror News Network: What can we expect from this series in terms of blood and guts?

Eric Red: Oh boy, there’s a lot of blood and gore in it. Lots shooting and staking of vampires splatter. Vampires in the saddle blowing to smithereens in daylight. Homesteaders impaled on buck and rail fences and weathervanes by Dracula. Water tanks filled with holy water that get dynamited and splash down to incinerate gangs of vampires on horseback. The action is wild. It’s gory, but fun gory.

Horror News Network: Can you talk a bit about the artwork in this book which is done by Ben Dunn?

Eric Red:  Ben’s black and white artwork has a marvelous storybook lithograph quality, rich in characterization and period detail.  Under his pen, the whole world comes alive on the page.

Horror News Network: Where can our readers find out more about this series?

Eric Red:  The comic is available from Antarctic Press at http://bit.ly/16vmhtA.

There is more information about it on my website at http://www.ericred.com/comics-1.html.

Horror News Network: In closing, what would you like to say to our readers about Wild Work?

Eric Red: Saddle up, you won’t believe your eyes!

Horror News Network: Thanks for your time Eric! We wish you the best of luck with this series.