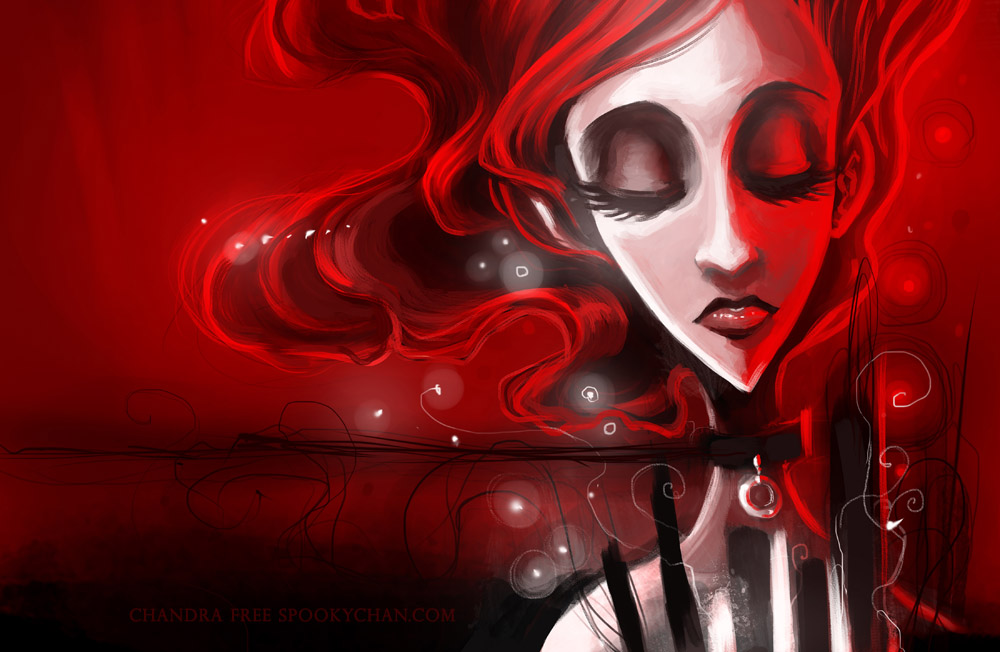 February is Women in Horror Month and as part of the Horror News Network spotlight on women this month we caught up with comic creator, writer, artist, and entrepreneur, Chandra Free. Chandra’s stunningly beautiful graphic novel The God Machine will soon be getting a relaunch on Free’s co-founded comics-label, Machina Corpse. Read on to hear about Chandra’s background, role-models, and work on the relaunch.

Chandra Free: Funny enough, I have not! As a child, I was deathly afraid of EVERYTHING from Slimer of Ghostbusters, skeletons, E.T., even C-3PO from Star Wars! It all scared me. It wasn’t until high school when I watched Scream when it came out on VHS (I’m that old) that I didn’t understand why I was scared of everything. It was funny and not scary at all. Shortly after that, I became fascinated by the darkness, the grim, and the gruesome. In the 2000s I saw The Cell (the one with Jennifer Lopez) and I understood that horror could be surreal, dream-like, artsy, and psychological. Sprinkle some Se7en in there at this time and I became interested in these crime-horror-bent stories where the murderer is methodical, fueled by bad religious upbringing, and grounded in some sort of reality that becomes subverted into the world of their design. I guess that’s a lot of horror, but I love it when it gets to be decadent with its artistry. I look at Hannibal, that series wreaks of art, beauty, and the sickest almost painterly gory kills.

Chandra Free: When I was a teen it just happened to coincide with my growing obsession with indy comics like Johnny The Homicidal Maniac, understanding my own life-long depression, my interest in psychology, along with playing with monsters and blood in art. I took all these things, placed them into a blender, and released it all into comics that told dark stories where I could exorcise my own demons and make spooky entertainment for people to enjoy. It’s very cathartic, to say the least!

HNN: Of all the horror mediums, women are probably the least represented in comics. Why do you think that is and what has your experience been like in comics?

Chandra Free: When I think of women in horror comics, I typically think of those in the indy scene creating their own unique styles in very different places. Women such as Jenn St Onge, Veronica Fish, Emily Carroll, Nimue Brown, Cat Stags, and more. I’d be remiss to not mention the one and only, Sandy King, the CEO of Storm King Comics, who is leading the way for all voices in horror comics. The John Carpenter Tales for a Halloween Night anthologies from Storm King are great examples of the best of the best, including a fearsome set of women behind the wheel of writing and drawing some of those horror stories. Sandy is one of those women leaders in comics that is a well-needed breath of fresh demonic air. She doesn’t wish to be like other comics companies, and there’s something so middle finger to the comics industry that I just love and respect. That’s a woman with a plan and marches to her own drum all while being the boss.

Again, I think women and nonbinary people are carving out our own space in horror, we’re just doing it a little differently and more under the radar than mainstream. From indy publishers to self-publishing via Kickstarter, webcomics, gumroad, and more. That’s where I’ve dwelled in most of my comics career in that indy world making my own path with my own creations. The only time being a woman was a damaging thing in the world of comics is when you get hit on at conventions, which I’m sure isn’t just the comics scene. Otherwise, my work has always spoken for itself and, I could be wrong, but my sex has had nothing to do with either getting or not getting a job in comics. Now, I could very well be a very lucky individual that has worked with honest and true people that were looking for excellent and unique work rather than continuing a bro club.

HNN: You are a writer and artist. Do you have a preference between the two?

Chandra Free: I’ve always been an artist since I was a little girl and it’s my one tool of the trade I know I’m good at. In my later years, I do find myself becoming a better and stronger storyteller, but art will always be my baby. Art makes up a good part of my identity as an individual and I just love doing it so much.

Chandra Free: Thank you! The God Machine has been a 20-year project for me and something so special I could never give up on her at all. The God Machine Volume 1 re:VISION Kickstarter is a chance to relaunch, revise, and reprint volume one again. This will be a better version of the book with revised text, new comic pages, and extended scenes. Also featuring new lettering from Taylor Esposito, and a new logo from Phil Balsman. This is going to be the definitive version of this book, all while relaunching the series for new and old eyes. If you got it before and loved it, you’ll want to get this one for sure! It’ll be a new and enhanced experience. The original book has been out of print for a while now, and it’s time to give Machina Corpse (my spooky comics company with author/artist Stephen Emond) a crack at giving the series new life.

HNN: Your own comics company? Tell me more!

Chandra Free: Machina Corpse started back in late 2019, as the brainchild of Stephen Emond and myself. The idea is to make a comic company that celebrates the spooky and weird, while finding untapped voices and diversity. Currently, Machina Corpse is in the beginning test phase of publishing only Stephen and I’s works to see if we have what it takes to publish others. It’s a work in progress, but something I hope takes off when we get the hang of what we’re doing.

HNN: Finally, is there any advice you would like to give to women entering horror?

Chandra Free: Be authentically you. You have a vision, stick to it, but also don’t be afraid of applying some of that constructive criticism to build a better version of your work. Be fierce, strange, fun, and fearsome. Don’t forget to be prepared to work your ass off to get where you want to go in this industry. You got this, now go make some horror!

HNN: Thank you for your time, Chandra, and good luck with the launch!

The God Machine Volume 1 re:VISION Kickstarter drops on March the 2nd, 2021, and runs for 30 days.

For more details as they drop find them at:
www.thegodmachine.org (soon to direct you to the Kickstarter link at the end of February)
IG/Twitter/Facebook: @TheGodMachine @MachinaCorpse
Youtube: @machinacorpse
Chandra Free’s personal spots on Twitter/IG: @spookychan 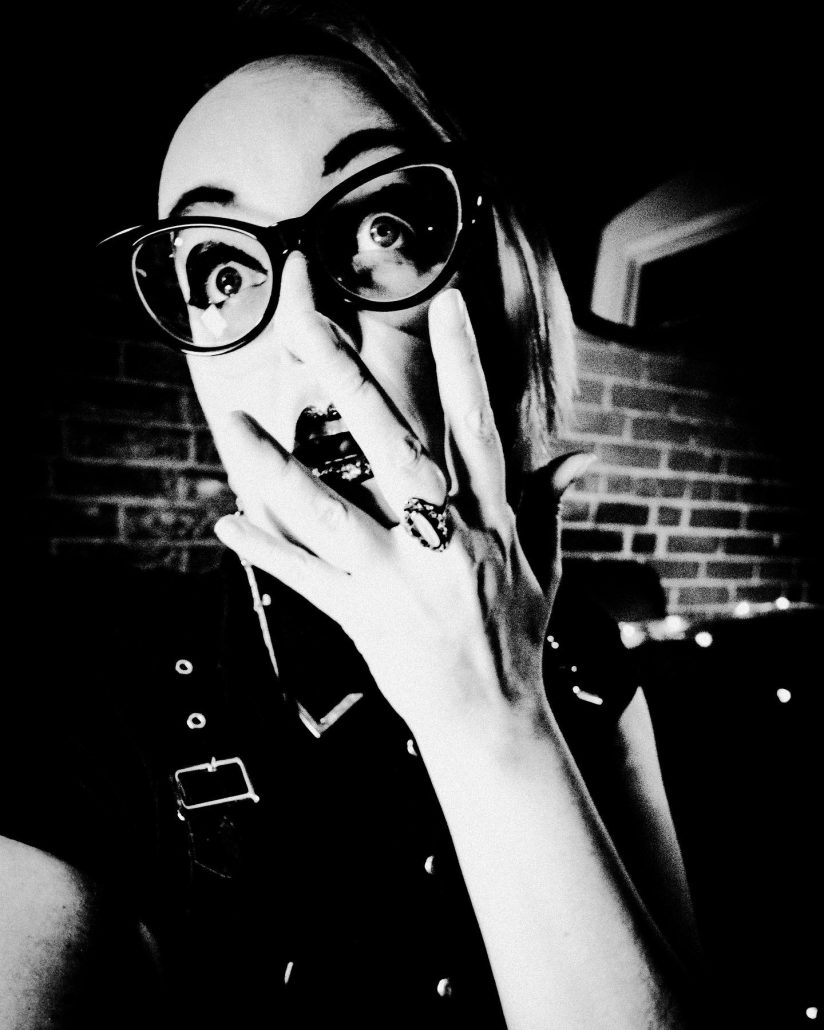 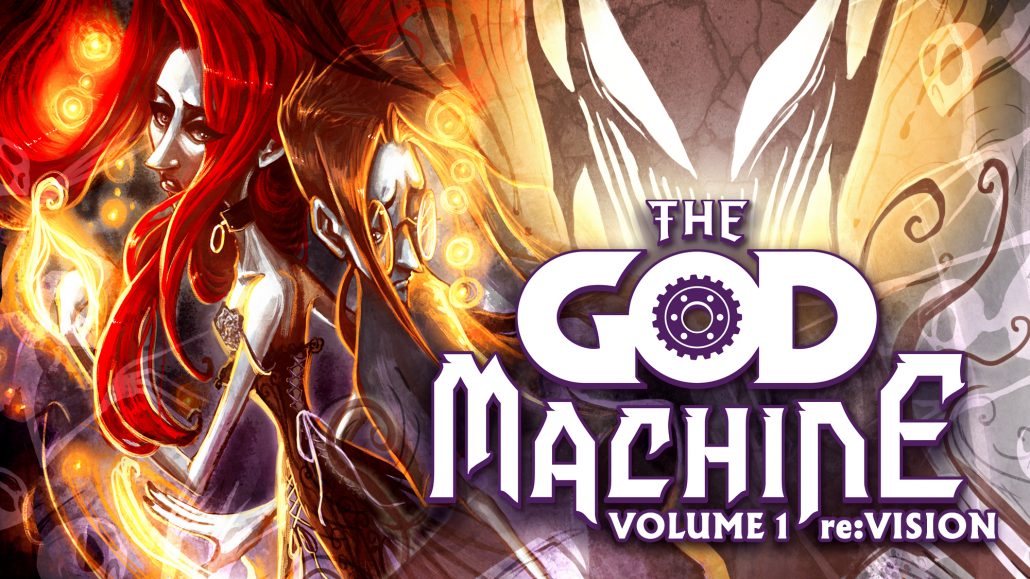 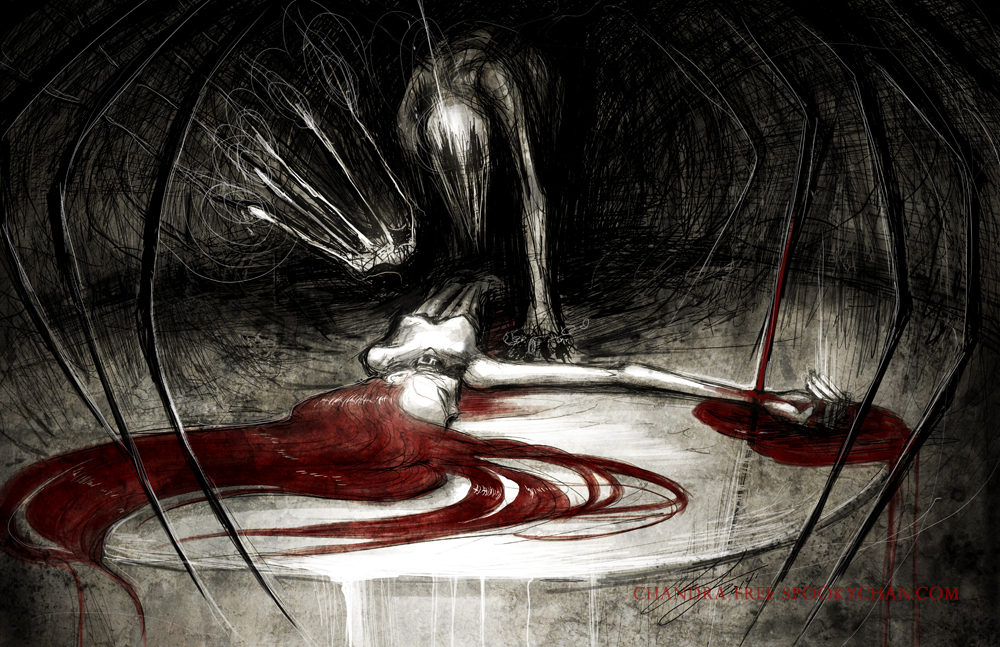