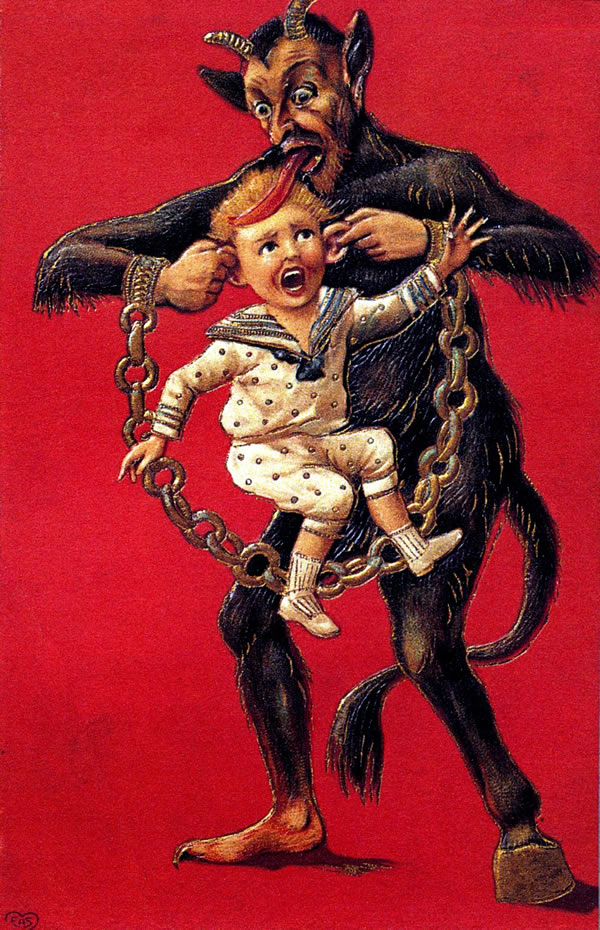 Many horror fans are understandably excited about director Michael Dougherty’s long-awaited follow-up to his ode to Halloween Trick ‘r Treat, in the form of his interpretation of the “Christmas Devil” Krampus.  These days, aside from evil Santa figures, Krampus is the horror icon of choice for those who still want to hold onto a little Halloween during the season of giving.  So who is this furry, horned antithesis of Santa and where did he originate?

Before exploring Krampus, the origins of the “Jolly old Elf” require a bit of an examination since they both originate from the same cultural base.  Most of Santa’s look, nature, and behavior can be traced to the original white beard of the north: Odin.  Odin, according to Norse-Germanic traditions, held a great celebration during the Winter Solstice or Yuletide (roughly taking place around December 21st) called the Wild Hunt.  The Wild Hunt consisted of a large contingent of spirits chasing a stag or other game animal across the sky, with Odin leading the pack.  This was often seen as a bad omen and it was best to stay indoors if the Hunt was spotted in the skies above.

The date of these ancient winter celebrations matches up pretty closely with our Christmas traditions (a purposeful move by the Catholic Church when the Vikings were being converted) and this is where the Santa-Odin connection starts to get very similar.  Before Haddon Sundblom’s Coca-Cola illustrations gave us our modern interpretation, Santa was a tall, gray wizard ala Odin (although Santa never wore an eye patch like the All-Father).  Near the end of the winter solstice, children would place boots filled with straw outside of their homes with hopes that Odin would stop by to feed his eight-legged horse (which gets broken up into eight individual reindeer later) Sleipnir.  In the morning, the children would be rewarded with toys, fruit and/or candy for their generosity.

When Christianity came into Europe and began convincing the natives to trade in their gods for one peaceful, fertility god in the form of Jesus, the traditions were transferred over to the dominant religion.  So while Odin could no longer be worshipped side-by-side with Christ, he could be transformed into a benign holiday figure like Santa to appease the masses and make the transition to Christianity more palatable.  As the model for Santa, Odin was transformed over a number of centuries from Father Christmas and St. Nicholas to the Santa we know today.

The legends of Krampus can also be traced back to the Norse traditions (although the tracing is of a rather light variety).  Some researchers contend that Krampus was the son of the Norse goddess of the underworld Hel (who was the daughter of Loki-so the trickster/devil connection does make sense).  Krampus does not appear in any of the myths that we have from this culture, but this is also the point where Krampus becomes most clearly associated with Germanic and Austrian traditions.   Krampus, according to most sources, is the punisher of those naughty kids who today are threatened with coal in their stockings.   Krampus, who is most often portrayed as a furry, dark, long-tongued devil with cloven hooves (which may come from the Yule Goat tradition or the classic Satan figure who is most likely based on the Greek god of revelry Dionysus), is often associated with Santa, not as his enemy, but as his co-worker; Santa takes care of the good ones, and Krampus gets those good-for-nothin’ rascals!

And what do those rascals get?  Well, let’s just say they would be lucky with the coal… Krampus comes to town with a whip, chains, and birch sticks called Ruten which he employs on any child bold enough to sin during the Christmas season.  And if you really upset your parents, Krampus may throw you in his sack and whisk you away to his lair.  He may also leave a bundle of his gold-painted Ruten sticks to hang on the wall to remind children of his coming next year (an early, more sadistic, and probably more effective version of “elf-on-the shelf”).

Krampus is more popular than ever with traditional Austrian “Krampus Night” celebrations cropping up all across the United States and I am sure the film will only bring his brand of holiday mischief and terror to a wider audience.  Let’s hope the film does him justice, and in the capable hands of Michael Dougherty, I think horror fans have little to fear…other than a visit from the stick-waving devil himself!