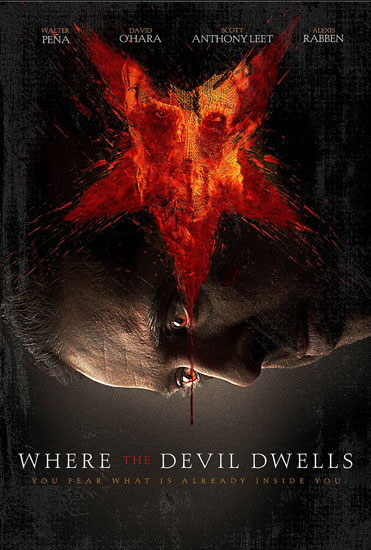 WHERE THE DEVIL DWELLS – Review

WHERE THE DEVIL DWELLS – Review

Synopsis: The year is 1989 and satanic paranoia runs rampant in America. Just out of the Sunnyvale Psychiatric Hospital, Lenard Vasquez, son of allegedly-slain serial killer Oren Butcher Vasquez, is remanded under house arrest with intensive supervision by Don Miller, a sadistic sheriff who abides by his own set of rules. Soon after moving in, Lenard is tormented by ominous signs that may be the design of a dangerous cult. Lenard s mental illness may never allow him to find out for sure. He enlists the help of a local student, Mitzi, to help him for the duration of his sentence. But when Lenard s father threatens to come back into his life and resume killing, he has to grapple with the question of what is real and how he will survive.

Our Thoughts:  Where The Devil Dwells is an interesting take on the psychological horror genre, centered around a schizophrenic man named Lenard Vasquez, who happens to be the son of a deceased serial killer.

After attacking a man he believed was a satanist, Lenard is placed on house arrest. He is unfortunately bullied by the local sheriff. Although he does manage to make a friend with a woman he hires to do chores for him while he is stuck in his home. Lenard starts to think he is a target of a cult of some kind, when he starts finding dead animals and strange Satanic symbols outside of his house. Not helping his situation, he begins having hallucinations of his father talking to him.

Much of the film is the viewer trying to decide if what is happening is all in his head or not. Up until the end I wasn’t entirely sure. And even in the end, although it seemed clear, I felt it was left open to interpretation.

Where The Devil Dwells keeps the viewer interested, questioning their judgments of what is happening, and thinking long after the film has ended. To me, this is the sign of a good psychological thriller. Walter Pena was excellent at allowing us into the mind of the disturbed Lenard Vasquez.

Although it is not a perfect film, it was an interesting and enjoyable story, that was executed well. Fans of the psychological genre will want to check out Where The Devil Dwells.