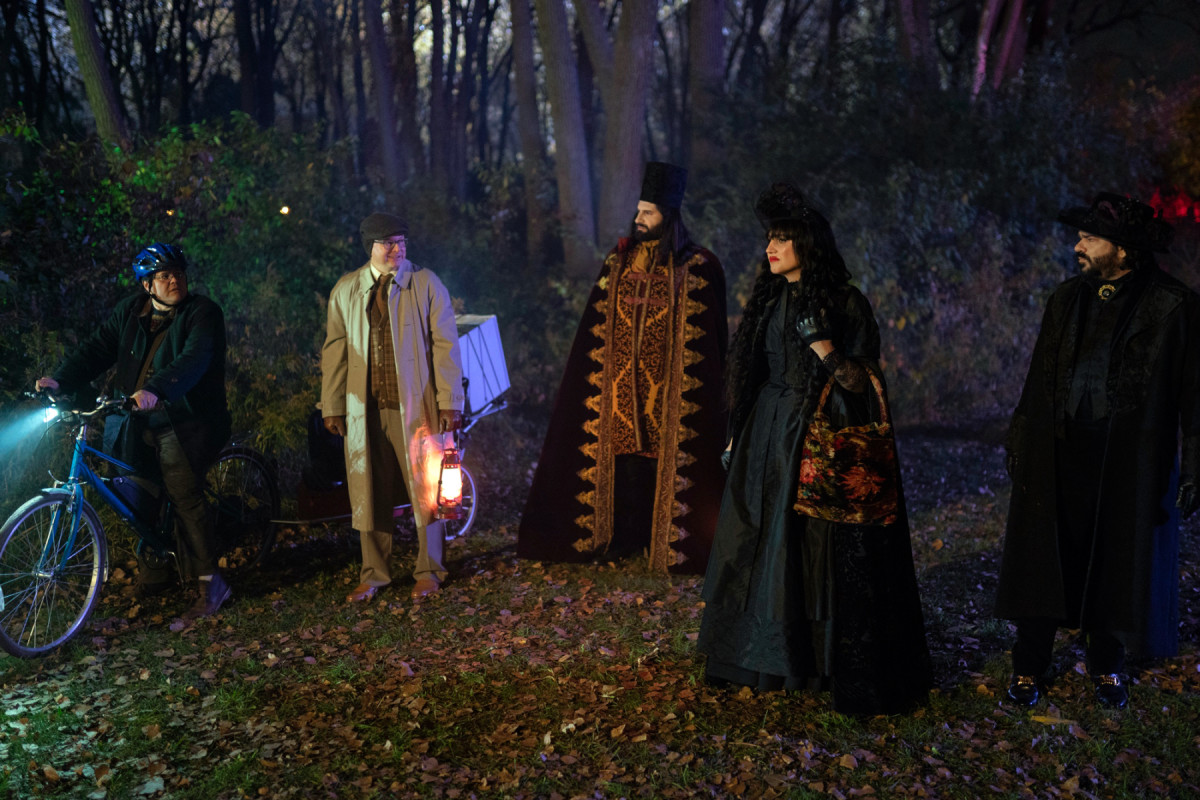 What We Do in the Shadows began as a film by Jemaine Clement and Taika Waititi in 2014, and it was perfectly adapted into an FX series last year featuring new characters in a traditional mockumentary television format. The first season was consistently excellent from beginning to end, and the finale left viewers hungry for more of the adventures of Nandor, Laszlo, and Nadja. Halfway through the second season of the show, it’s clear that the series still has a lot more engaging material to offer and supernatural scenarios to explore. Between the show’s all-star roster of guest appearances, its always-amusing “fish out of water” setups for its vampire protagonists, and its dedication to exploring its engaging supporting characters, What We Do in the Shadows is simply the best horror comedy content available on television this season.

You never quite know who might appear on What We Do in the Shadows next. After featuring a massive list of guest stars last year- including Dave Bautista, Tilda Swinton, Evan Rachel Wood, and Wesley Snipes- Season Two brings Haley Joel Osment, Benedict Wong, and a highly-anticipated appearance by Mark Hamill into the mix. In each guest appearance, the performers tend to lose themselves in the goofy atmosphere of the series and deliver memorable moments that are so absurdly atypical that the viewer can’t help but laugh. In the season premiere, Osment plays an incompetent familiar whose accidental death leads to a failed reanimation, courtesy of Wong’s character: a dubious necromancer who still has me chuckling weeks after I first watched the episode. Jemaine Clement, Taika Waititi, and the other writers and directors of the show have established an atmosphere where anything can happen and not even the biggest movie star has permission to take him or herself too seriously. The result is one delightfully unexpected appearance after another in each new episode.

While the first season of What We Do in the Shadows focused on Nandor, Laszlo, and Nadja as they attempted to conquer Staten Island, the first half of the second season doesn’t mind getting intimate with smaller stories which develop their characters and illuminate the various tedious goings on in the lives of those who have been alive for centuries. While Season One focused on giant vampire night clubs and massive ancient rituals, Season Two finds the gang hanging out at a Super Bowl party (which they think is a celebration honoring the Superb Owl), and taking a chain letter email way too seriously. These smaller scenarios allow for all sorts of corny vampire situational comedy, and they reward fans who have been studying the quirks and characters since their debut. Kayvan Novak, Matt Berry, and Natasia Demetriou are hilarious in their respective roles, and they’ve grown as an ensemble cast into a group of characters who simultaneously love and can’t stand each other. The scaling-down of the storytelling has only improved the engaging quick-witted nature of the series.

The secret weapon of What We Do in the Shadows has always been its stellar supporting characters, and the first half of Season Two gives the audience much more contact time with fan favorites Guillermo and Colin Robinson, played by Harvey Guillén and Mark Proksch. Season Two expands on Guillermo’s inner demons as he learns that he might actually be a vampire hunter after all of these years of serving Nandor as his familiar. It’s always amusing to watch him go back and forth between not needing the affection of his bloodsucking roommates and wanting to fall back into old habits. Mark Proksch slayed last season as Colin Robinson, the boring energy vampire, and the series continues to find entertaining ways to show him sucking the life force out of his human coworkers. Halfway through the new season, Colin Robinson becomes the manager of his company, and he puts his underlings through a barrage of boring and soul-draining meetings that any working-class American is sure to understand.  It’s expansions of the series lore like these that give the show more breadth and limitless opportunities in its second season.

What We Do in the Shadows is hilariously sharp and bitingly funny, and the first half of Season Two has me thoroughly engaged and eager to see what kind of ridiculousness will happen over the next couple of weeks. This horror comedy is always a pleasure to watch, each and every episode.

Stay tuned to Horror News Network for complete coverage of What We Do in the Shadows as soon as it breaks!

‘Blade’ Reboot Will Not Ignore Legacy Of Wesley Snipes