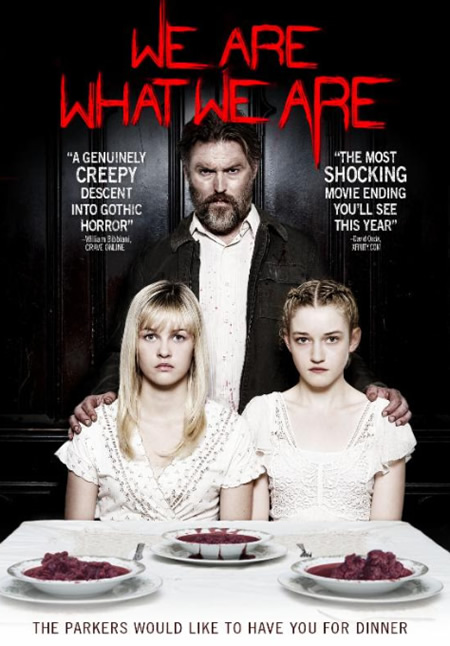 Following a deadly storm, two beautiful young sisters are left to support their family – and carry on a gruesome tradition – in WE ARE WHAT WE ARE, the acclaimed new masterpiece from director Jim Mickle. The gripping, unnerving and ultimately horrifying film arrives on Blu-ray and DVD on January 7, 2014, from Entertainment One (eOne), with SRPs$24.98 each.

A seemingly wholesome and benevolent family, the Parkers have always kept to themselves, and for good reason. Behind closed doors, patriarch Frank (Bill Sage, Mysterious Skin, American Psycho) rules his family with a rigorous fervor, determined to keep his ancestral customs intact at any cost. As a torrential rainstorm moves into the area, tragedy strikes and his daughters Iris (Ambyr Childers, The Master, Gangster Squad) and Rose (Julia Garner, The Perks of Being a Wallflower, Martha Marcy May Marlene) are forced to assume responsibilities that extend beyond those of a typical family.

As the unrelenting downpour continues to flood their small town, the local authorities begin to uncover clues that bring them closer to the secret that the Parkers have held closely for so many years. In his vivid reimagining of the 2010 Mexican film of the same name, director Jim Mickle (Mulberry Street, Stake Land) paints a gruesome and suspenseful portrait of an introverted family struggling to keep their macabre traditions alive, giving us something we can really sink our teeth into.

WE ARE WHAT WE ARE has received superlative-filled reviews. “The Silence of the Lambs finally has a worthy successor,” said Matt Barone of Complex. William Bibbiani of Crave Online called it “a genuinely creepy descent into gothic horror.” “The most shocking movie ending you’ll see this year,” raved David Onda at Xfinity.com. Film Threat’s Brian Tallerico called it the “strongest the genre has seen in years.” The film “withholds its greatest shock for the end,” said Tim Grierson of Screen International. “Childers and Garner are absolutely mesmerizing as Iris and Rose,” said the Los Angeles Times’ Betsy Sharkey.

The Hollywood Reporter’s David Rooney had high praise, writing: “The film is that rare modern horror movie that doesn’t simply fabricate its scares with the standard bag of postproduction tricks. Instead it builds them via a bracing command of traditional suspense tools … This is polished film craft.”