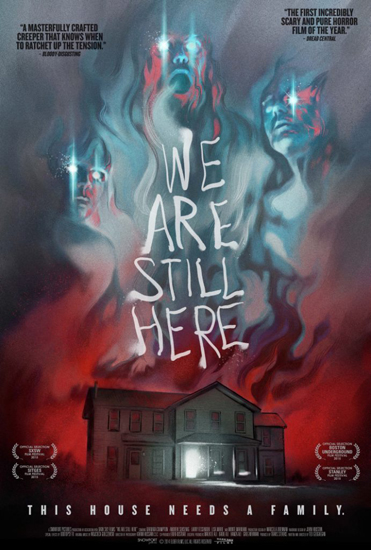 ‘We Are Still Here’ Hits Theaters and VOD June 5

Hot off the heels of a hugely successful festival run, Dark Sky Films is proud to announce the theatrical and VOD release of Ted Geoghegan’s directorial debut, WE ARE STILL HERE.  Featuring a dream cast of genre film veterans, WE ARE STILL HERE hits theaters and VOD on June 5, 2015.

After the death of their college age son, Anne and Paul Sacchetti (Barbara Crampton and Andrew Sensenig) relocate to the snowswept New England hamlet of Aylesbury, a sleepy village where all is most certainly not as it seems. When strange sounds and eerie feelings convince Anne that her son’s spirit is still with them, they invite an eccentric, New Age couple (Larry Fessenden and Lisa Marie) to help them get to the bottom of the mystery.

They discover that not only are the house’s first residents, the vengeful Dagmar family, still there – but so is an ancient power. A primal darkness slumbers under the old home, waking up every thirty years and demanding the fresh blood of a new family.

An altogether new take on the haunted house genre that deftly mixes human drama and comedy, WE ARE STILL HERE is a couple’s terrifying journey through darkness and loss set against the freezing New England winter.

WE ARE STILL HERE

“Geoghegan establishes what seems to be a simple haunted house set-up but adds complications which make the outcome less predictable.” – SCREEN INTERNATIONAL

“We Are Still Here works on multiple levels; new horror fans will enjoy the thrills and chills, while experienced horror nuts will delight in the clever twists on an old formula. It doesn’t shy away from more extreme imagery, but its true intention is to unsettle and surprise, which it does quite well.” – FANDANGO