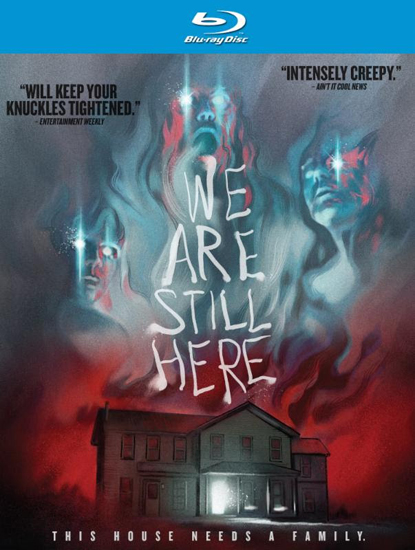 A tragic death leaves a married couple devastated, but their misery soon turns into mortal fear in the thoroughly haunting new film WE ARE STILL HERE. The Dark Sky Films/MPI theatrical release, from the producers of The House of the Devil and Cheap Thrills, comes to Blu-ray and DVD on October 6, 2015.

WE ARE STILL HERE is an atmospheric, classically constructed haunted house story, but with modern, heightened tension and action. After their teenage son Bobby is killed in a car crash, Paul and Anne Sacchetti move to an isolated 19th-century house in the New England countryside to try to start a new life. But soon the grieving couple begin to sense they are not alone in the old house. The Sacchettis’ psychic friend May arrives to investigate Anne’s hopeful feeling that Bobby’s spirit is also there.

Unknowingly, the Sacchettis become the prey of a family of vengeful spirits that reside in their new home, and before long they discover that the seemingly peaceful town is hiding a terrifyingly dark secret. Now they must find a way to overcome their sorrow and fight back against both the living and dead as the malicious ghosts threaten to pull their souls – and the soul of their lost son – into hell with them.

The cast of the MPI/Dark Sky Films theatrical release includes horror icon Barbara Crampton (Re-Animator, You’re Next), Andrew Sensenig (Upstream Color, The Last Exorcism Part II), actor-filmmaker Larry Fessenden (Wendigo, Stake Land, You’re Next) and Lisa Marie (Sleepy Hollow, Ed Wood). The film marks the directorial debut of Ted Geoghegan, writer of Indie horror favorites Sweatshop and Barricade, a producer of the anthology film The ABCs of Death 2. The atmospheric cinematography is by Karim Hussain (Antiviral, Hobo With a Shotgun). Features on the discs include a Behind the Scenes look featuring writer/director Ted Geoghegan and producer Travis Stevens discussing the genesis of the project and the challenges and successes of bringing the script to life.

WE ARE STILL HERE had its world premiere as an official selection at SXSW 2015 and it has achieved a remarkable 93% review rating on Rotten Tomatoes. “Will make you scream and make you laugh, and possibly leave you speechlessly gesticulating at a charred zombielike ghost in the background,” said Helen T. Verongos of The New York Times. Steve Barton of Dread Central called it “the first incredibly scary and pure horror film of 2015. There’s just nothing out there like it, and there hasn’t been in quite some time.” The film “works on multiple levels; new horror fans will enjoy the thrills and chills, while experienced horror nuts will delight in the clever twists on an old formula,” said Peter Martin of Fandango. Patrick Cooper of Bloody Disgusting called it”a masterfully crafted slow creeper that knows when to ratchet up the tension and release.”