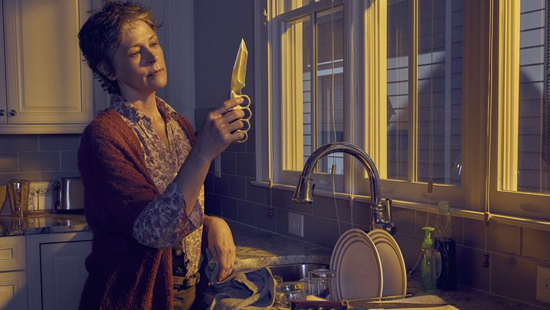 McBride says “She’s adaptable — and one of her weapons is adaptability.”  She goes on to talk about the character’s dual personality, saying “I think they’re both equal sides of the same coin, and I think they’re both as dangerous and both as necessary.  Each one is necessary so far, but they’re both who she is. And each one is aware of the other. It’s beautiful and complicated, but so simple. This is a tool. This is one of her weapons. It’s the mask.”  She goes on to say that Carol ” is multitasking. She’s got to carry that cover a little bit and she’s still trying to find out where the vulnerabilities are. I think she’s kind of the eyeballs for Rick.”

The logline from season six reads: Season six starts with Alexandria’s safety shattered by multiple threats. To make it, the people of Alexandria will need to catch up with our survivors’ hardness while many of Rick’s people will need to take a step back from the violence and pragmatism they’ve needed to embrace. These reversals won’t happen easily, or without conflict. But now Rick’s group is fighting for something more than survival. They’re fighting for their home, and they will defend that at any cost, against any threat, even if that threat comes from within.

McBride talks about the character of Morgan (Lennie James) saying “It’s going to be really interesting to see, because they haven’t really interacted yet. I don’t know what he’s going to do with these people. He’s like, ‘Life is precious.’ [But] hold up. Well, of course it is, but a life that’s getting ready to kill you? Your life is more precious than that one.”