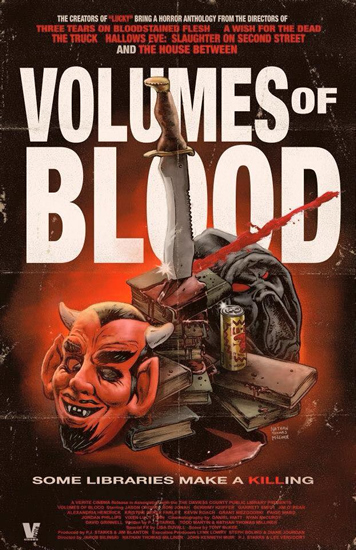 Horror News Network: What inspired you to make a horror movie about students attempting to create their own Urban Legends?

PJ Starks: It wasn’t so much the urban legends aspect as it was my desire to make a horror anthology. I wanted to make one about three years ago involving a couple that was house hunting and unfortunately nothing really worked out. The inclusion of students creating their own urban myths came about as a way to both tell a unique anthology story using the same setting for all stories and also give a nod to the film Urban Legend, which is one of my favorite of the ’90’s slasher craze.

Horror News Network:  Growing up, did you hear of urban legends? And if so, which ones scared you?

PJ Starks: Every town has their own legends; I know that Owensboro has its fair share of them. There’s an area near here called Bon Harbor and I’ve heard everything from satanic cults sacrificing virgins in barns to the woods around there being prowled by some kind of werewolf. Then there’re the age old legends like the killer in the house while the babysitter watches over the kids, why you shouldn’t drink pop rocks and coke and how you shouldn’t flash your high beams at a car with no lights on. I think the one that scared me the most was back in the late nineties I heard stories about aids victims taking revenge by sticking infected needles in the coin returns of various public machines and inside the cushions of theater seating. That kinda scared me enough to avoid going to the movies for a while.

Horror News Network:  What horror films and or filmmakers served as inspiration for you when making ‘Volumes of Blood’?

PJ Starks: My cliche response has been that VOB was a horror film made by horror fans for horror fans. All the directors/writers on the project, me included, are horror nerds. We’ve ingested hundreds of hours of grue, depravity and suspense filled bloodshed. We all have things that truly scare us and things that we love most about cinematic macabre. These are the attributes that we gave to the film. It’s chocked full of homages from horror film tag lines to character names and sometimes direct references about specific horror movies like The Texas Chainsaw Massacre and Insidious. The various forms of filmmaking throughout the run time has been compared to Carpenter, Craven and even David Cronenberg. I feel like we made a film that would require repeat viewings to catch all the references and jabs at subgenres. I’m extremely proud of that fact.

Horror News Network: What was your favorite urban legend created in this anthology? And which one was the most enjoyable to film?

PJ Starks: My two favorite segments in the film are 13 After Midnight directed by Jakob Bilinski and Encyclopedia Satanica directed by Nathan Thomas Milliner. 13AM was written by myself and Satanica was written by Todd Martin and Milliner. Jakob is a good friend of mine and a helluva filmmaker. He has a very distinct style when he makes his movies so when I wrote the script for 13AM I tailored it to his tastes. He knocked it outta the park and created a very visually surreal experience. I was happy with the script after I wrote it because I felt that the twist was strong and Jake took it to the next level with his talent. Nathan is also a good friend and his take on Satanica was absolutely beautiful and it’s definitely one of the more fleshed out stories as well as the longest of the narratives. His attention to detail and storytelling was spot on. Once you throw in the fantastic cinematography by DP Bonnell, solid performances from Kevin Roach, Kristine Renee Farley and Todd Reynolds and the badass special fx from Lisa Duvall you’ve got a treasure trove of horror, suspense and story that stick with you till the end.

Horror News Network:  In writing the story, were there other legends created that had to be

left out of the film? There is so much creativity with this idea, I feel like there had to be other ideas for legends that were not used in the film.

PJ Starks: Going into this project I approached Todd because he’s a strong writer and has some great concept for narratives. He wrote an award winning short called Lucky that I also produced in 2014, so when the time came to work on VOB I knew he needed to be attached. Going into this project he had some ideas, but I already had the concepts for three of the segments so he came up with A Little Pick Me Up which has gotten some awesome kudos in reviews. I didn’t have a story, but just the title Encyclopedia Satanica that I threw at him and said, “base a concept around that name.” I mean it was too good not to use. I know that he has a ton of ideas, but none of them were actually discussed for Volumes of Blood.

Horror News Network: Do you think there could ever been a sequel? After seeing the film, I feel like the story could continue in some form, in other towns, in another anthology film.

PJ Starks: As a matter of fact Todd, myself, Eric Huskisson and a few others have already had a sit down about VOB2. I mentioned that I wanted to make an anthology a few years ago but nothing coalesced, ironically I’ve since been able to revisit my old concept and adapt it for Volumes of Blood 2. I had a whole other concept I was going with that took place at a radio station and a video rental store, but then I remembered my idea about a couple looking to buy an old house and realized that kept more with the spirit of what made the first film so enjoyable. I scrapped the other concept and am fleshing out the other idea. It takes place in the same town and on the same day as the events of the first film, but also jumps back in time over the course of ten years weaving together a whole new cast pf characters and atrocities. If all goes as planned I’m envisioning a film that’s just as much fun as the first, but with a larger body count.