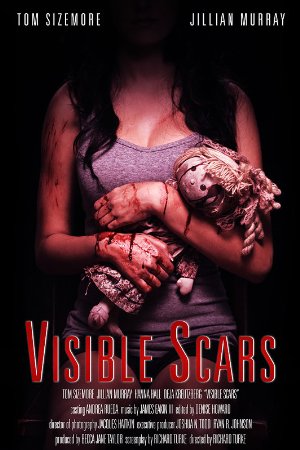 If ever there was a film that had its heart in the right place, it has to be writer/director Richard Turke’s suspenseful creep-fest Visible Scars. Unfortunately, if ever a movie failed to hit its mark it would have to be this movie as well. A discombobulated, uneven story which begins in 1993, then briefly jumps a few years ahead before ultimately settling in the present, Visible Scars feels like a film that knew where it wanted to start and end…..but had zero idea about everything in between. Turke impresses with his overall presentation, but takes major hits for the plot holes (for which there are many).
Scars’ drawn-out, disconnected story spans 17 years. The initial scenes are the Tom Sizemore show, as the veteran actor and lunatic (Saving Private Ryan, True Romance) takes crazy to a new level as he supposedly kills a young mother and kidnaps her twin babies in the hopes of appeasing his child-obsessed wife. I say “supposedly” because the back of the DVD cover does a much better job of detailing the backstory than the actual movie does. This film achieves the rare feat of compiling a high body count without actually showing most of the deaths on camera. Anyway, the house where Sizmore and the twins lived burns down seven years later, presumably (again) with them inside. Fast forward to present-day, a young woman named Stacy Walker (Jillian Murray) is drawn to her uncle’s cabin, the same woods where the burned-down house of horrors stood. As Stacy flees from her abusive boyfriend, her friends, a retired detective named Black (Dave Parke) and even the park ranger begin trailing her into the wilderness leading to a standoff of violence and inexplicable horror. This convoluted story of murder, kidnap, implied murder and even forced cannibalism is a bit too much on the cliché side; no explanation or motives are provided, but the horrors are palpable. I’ll certainly give Turke credit for that……the violence is eventually welcomed, though the journey to this destination is confusing and just doesn’t seem to fit.
The budget for Visible Scars was reported to be around $1.2 million; if this is true, I’d imagine that Sizemore’s fee was at least 90% of it. Not that the other actors and crew didn’t deserve their salaries, but if you’re paying on performance then they’d probably run at the lower end of the spectrum (granted they didn’t have much to work with story-wise.) Murray looks incredibly similar to Katie Holmes, and does her best impression of the ex-Mrs. Cruise from The Gift. Boyfriend Brad Samson (Jonas Fisch) bears a striking resemblance to Skeet Ulrich, so maybe the Holmes/Ulrich combo was enough to justify their employment? Of course, I could also be looking upon the acting performances as less than stellar due to the weakness of the film as a whole. In this case, the fringe players become collateral damage. Overall, the characters are unlikeable: bungling law enforcement, abusive spouses, and women that are portrayed more as victims than as heroes. Instead of showing us separate groups of people and circumstances and having them converge towards a common arena, it almost seems like this story was written backwards. A series of non-sequiturs over the course of 17 years, which remain unrelated throughout the majority of the film, attest to this.
Though focusing on the faults, again, I did find the spirit of Visible Scars to be intact. At its core, Scars is a story about true loss of innocence. It’s also a social commentary on the effects of domestic abuse and mental illness, although an oft-muddled and convoluted one at that. Turke does provide us with some nice shots and camera work, and the isolated outdoor sequences are well done (though the gloomy score, while mostly appropriate, does wear a bit thin at times). The film’s conclusion does allow the violence and bloodshed to ramp up, though the ultimate fate of many involved leaves a LOT to be desired.
Ultimately, Visible Scars will leave you with more questions than answers. Specifically, it could have you shaking your head asking, “what did I just watch exactly?” Scars is well-intentioned, but misses the mark.