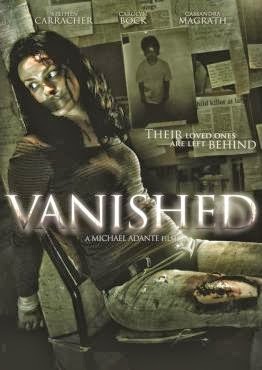 Osiris Entertainment has licensed its noted psychological thriller Vanished to Redbox, America’s leading destination for entertainment, just announced by CEO Evan Crooke.  Inspired by a true-to-life child abduction scenario and in the vein of the landmark Man on Fire (2004), this taunting thriller is now available at Redbox kiosks nationwide.  We would love to set an interview with CEO of Osiris Entertainment, Evan Crooke. I have attached high res poster art for Vanished as well as the press release.

The film which centers on the kidnapping of ‘Winona (aptly portrayed by Cassandra McGrath) and ‘Hunter’s’ daughter, ‘Emily’ (young Australian Chloe Guymer). Winona and Hunter surpass all reasonable limits in order to rescue their daughter beaten physically, mentally, and psychologically as they discover retribution is the root of the kidnapper’s incentive.

“We are delighted to continue our relationship with Redbox by introducing one of the quintessential psychological thrillers — Vanished — to its millions of customers,” said the entrepreneurial Crooke. “Their embracing of Vanished represents a milestone for Osiris Entertainment as it shows we are acquiring product our retailers demand and listening closely to what consumers want.”

Osiris Entertainment is a film distribution company under the helm of Evan Crooke that specializes in providing various platforms of distribution of quality films ranging from thrillers to intense drama and romantic comedy.  Their large catalog of film is distributed to an array of top global broadcasters including NBC Universal, Netflix, RedBox, Starz, A&E Networks, Dish Network, Amazon, Ingram Entertainment, Time Warner and Showtime. The precedent-setting coompany continues to expand as it collaborates with major movie house chains for theatrical releases such as AMC and Arclight Cinemas.