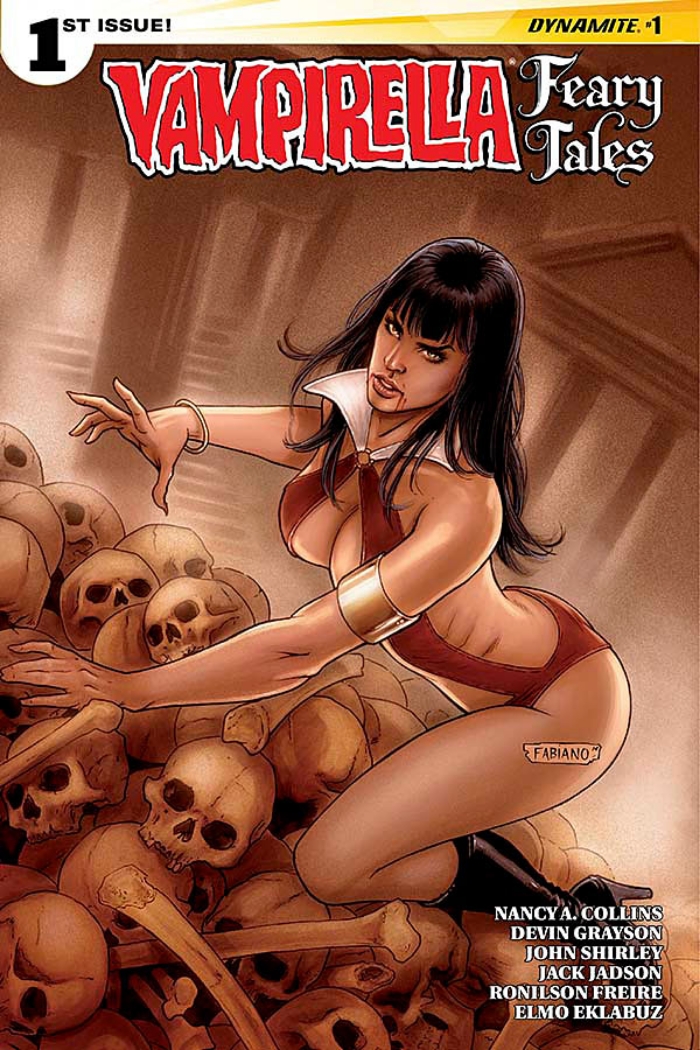 Dynamite Entertainment has provided us a preview of the new Army of Vampirella: Feary Tales comic.

Author Nancy A. Collins (Vampirella, Swamp Thing, Sunglasses After Dark) has called upon some of today’s finest creative talents – including Gail Simone, Steve Niles, Joe R. Lansdale, Devin Grayson, and Stephen R. Bissette – to celebrate Vampirella’s 45th Anniversary by crafting five issues of twisted tales, bizarre bedtime stories, and fearsome fables in the tradition of the original Warren magazines, each featuring everyone’s favorite sexy, kick-ass vampire-turned-monster hunter. And, boy, have they delivered! While exploring the Transylvanian castle she’s recently inherited, Vampirella discovers a strange old book of “Feary Tales” that seems oddly familiar. Upon opening it, she is sucked inside its pages and lands in a weird alternate reality, where she is compelled by a disembodied voice calling itself The Storyteller to live out each of the ‘feary tales’ if she ever hopes to return to reality. In the first issue, Vampirella is surprised to discover herself married to an infamous wife-killer in “Bluebeard’s Blood” by Devin Grayson (Nightwing, Batman: Gotham Knights, Titans), and then finds herself both the belle and the bête of the ball in “Cinderella? Vampirella!” by John Shirley (award-winning horror & science fiction author, and screenwriter for the 1994 cult classic film, The Crow).