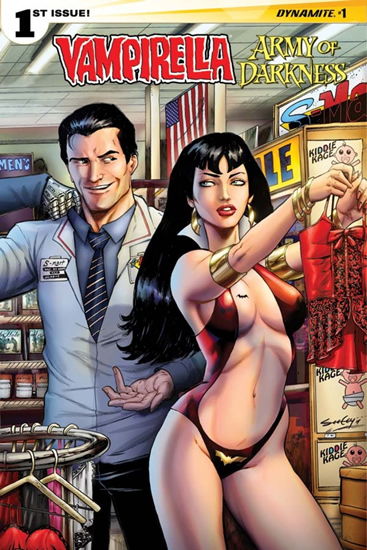 Synopsis: During his time trapped in the England of 1300 A.D., Ash listened to the terrified primitive screwheads tell of a horrific flying Deadite similar to the one he blasted out of the air when he arrived – but much deadlier. At the same time, a raven-haired temptress wants to give him some sugar – as his last meal!

Our Thoughts: Issue #1 of the Vampirella / Army of Darness mainly centers around Ash and sets the scene for what is to come.  Ash is snarky and just being “Ash.” The reader is also treated to some great action. Rahner lays out some brutal scenes, while Morales, with Hickman on colors, complements those sequences.  The artistic team handles the changing atmosphere and moods well with changing the tones up.

Vampirella / Army of Darkness #1 is out Wednesday July 8th!