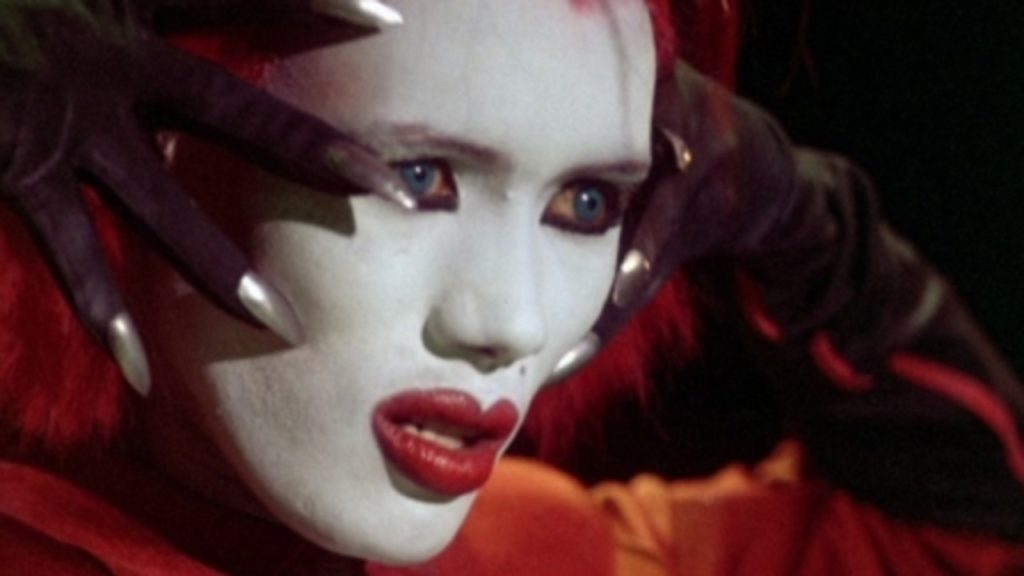 The mid-1980’s was rife with vampire films that mixed horror and comedy and featured young casts of up-and-coming talent.  The film that gets most of the credit for kicking off this sub-genre is 1985’s Fright Night.  Fright Night modernized the vampire for the 1980’s, yet kept all of the classic superstitions and gothic influences.

While Fright Night was certainly the first, the second film to push vampires into the day-glow 1980’s was the cult classic Vamp.  After watching Arrow Video’s new special edition blu-ray release, it is more clear than ever that Vamp is an underappreciated horror film from the “Me” decade. 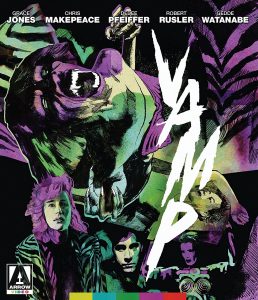 Most of the attention the film received in 1986, and even today, centers around star Grace Jones.  Jones, known for her elaborate stage shows and gender bending persona, stars as the vampire queen who preys on unsuspecting victims at an out-of-the-way adult dance club.  Other critics have drawn parallels between Vamp and Robert Rodriguez’s From Dusk till Dawn, and the 1996 film does seem to borrow (and further flesh out) the vampire queen character.  There are numerous props in the film that indicate that Katrina (Jones) has connections to ancient Egypt beyond an aesthetic appeal, but director Richard Wenk is happy to have the audience guess at this back story (and in the 1980’s, most low budget productions did not spend much time engaged in “world building”).

In fact, Wenk discusses how the origins of the film came about William Castle-style, stating in the fine documentary (One of those Nights: The Making of Vamp) that accompanies this disc that the poster came first and the story came second.  Obviously, not much was expected out of this low budget summer horror comedy, but it is clear that the filmakers took the project seriously.  The look of the film is pure 80’s: lots of big hair, zebra print, and constant pink and green lighting.  Cinematographer Elliot Davis (who has gone on to work on numerous films such as I am Sam and Twilight) explains how he suggested the pink and green color scheme to make the production look more sophisticated and less “cheap”and a variety of camera angles and expressionistic choices ala The Cabinet of Dr. Caligari.  While this connection is not apparent without the assistance of Davis’ explaination, it is clear that the crew had grander designs than their budget or script would allow.

You get all of the classic horror archetypes in Vamp: the “too-cool-for school” AJ (Robert Rusler), the “unlikely, smart hero” Keith (Chris Makepeace), the “innocent-cute-girl-surrounded-by-debauchery” Allison (Dedee Pfeiffer), and the “nerdy spazz” (Gedde Watanabe).   While the performances are a bit dated, they are comperable to other productions of the day.  Two surprise additions to the cast for a modern audience come in the form of quintessential bad guy Billy Drago (Snow) and Hy Pike as “desk clerk”(better known to film fans as club owner Taffey Lewis in Blade Runner).  The look of Drago’s character and his fellow vampire punks look oddly like the cast of The Lost Boys, which would be released a year later than Vamp in 1987.

Is this film quintessential viewing for horror fans?  By itself, there are better options to explore, including a number of films that Vamp influenced, but when companies like Arrow put in the time to create true special editions like this one, it is worth it.   The amount of bonus footage, outakes, tv spots, trailers, and the aforementioned 45 minute documentary serves as a “time capsule” of a bygone era of guerilla film making and when fully explored, the viewer is transported back to a time when genre films were made on a shoe-string budget with no thought given to future reminiscience.  While these films may be gone, they are not forgotten due to comprehensive packages like this one.