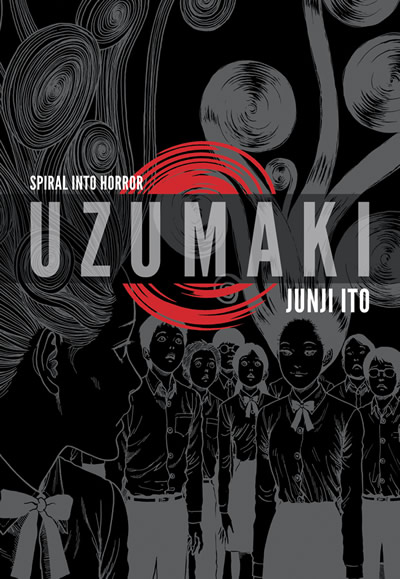 Synopsis: Kurouzu-cho, a small fogbound town on the coast of Japan, is cursed. According to Shuichi Saito, the withdrawn boyfriend of teenager Kirie Goshima, their town is haunted not by a person or being but by a pattern: uzumaki, the spiral, the hypnotic secret shape of the world. It manifests itself in everything from seashells and whirlpools in water to the spiral marks on people’s bodies, the insane obsessions of Shuichi’s father and the voice from the cochlea in our inner ear. As the madness spreads, the inhabitants of Kurozu-cho are pulled ever deeper into a whirlpool from which there is no return!

Our Thoughts: For horror comic fans it does not get cooler than this. VIZ Media just released the UZUMAKI Deluxe Edition! Junji Ito’s inventive horror manga tells about the gradual decent into madness of a seaside town overrun with spirals. The hardcover also features 12 pages of new full-color interior artwork.

Junji Ito’s contribution to horror comics is huge. If you are unfamiliar with his work be sure to check out the titles he is most popular for which include Uzumaki, Tomie and Gyo. Ito has a way of rapidly engaging readers within the twisted universe he creates.

With Uzumaki, Ito unleashes an onslaught of terrifying events and grotesque figures. The storylines are creepy and told in a way which makes you feel almost helpless for the characters involved. The artwork is top notch and you won’t be able to unsee some of the terrors within these pages.

If you are looking for a book that is both incredible and inexpensive look no further than this hardcover from Viz Media. Uzumaki is a MUST HAVE for horror fans!