The Unexplained Disappearance of Karla Marks  by director Kurtis Spieler (Sheep Skin) tackles a number of the most popular horror sub-genres from both the large and small screen: the “found footage” film (made famous by The Blair Witch Project), the “haunting docudrama”(Paranormal Witness) and the paranormal investigative program (Ghost Adventures, Ghost Hunters).  All three sub-genres are immensely popular with horror fans, but combining all three of these types of programs in one film is no easy task.

The premise of the film centers around a haunted well in the Connecticut woods and the tragedy that befalls a young couple who decide to investigate it.  The narrative structure begins with a series of “talking head” interview clips in standard documentary style.  This technique effectively places the viewer in a familiar place and the interview quality rivals most “ghost shows” one sees on Destination America and other cable channels.  While the performances on camera vary in terms of acting ability, this section of the film does its job in terms of set-up for what’s to come.

The film then switches to the format made famous by Syfy’s Ghost Hunters franchise, complete with the “SIGNS” acronym for the group that most paranormal investigative teams are happy to brand themselves with.  This section of the narrative also follows most of the “rules” of the established paranormal investigation program, with night camera set-ups and evp meters galore.  At this point, the film also journeys into the realm of the “found footage” genre, and it is not always clear who is operating the camera, particularly at the end of the film. 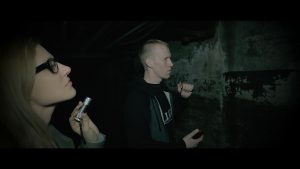 The standout performance in the film is delivered by Bryan Manley Davis who portrays the grieving husband of Karla Marks.  He effectively plays a distraught husband without devolving into a melodramatic mess in the majority of the film.  He is clearly the focus of the film (and gets the majority of the screen time here), but he could have been utilized even more in this production.  Kristen Seavey is also convincing as a member of the paranormal team in the role of Riley Harper.  She perfectly fits the stereotypical “too attractive to be hunting ghosts” team member that is often a staple on programs such as Ghost Hunters or John Zaffis’ Haunted Collector.

While the story veers off in an unexpected direction in the third act, you have to give credit to Spieler for navigating a difficult course.  While watching the film, I constantly said to myself “This guy should film an actual documentary” about a haunted location in New England such as Connecticut’s infamous Dudley Town.  Seeing this film, I believe that he could certainly tackle one of these “stranger than fiction” tales.   Look for The Unexplained Disappearance of Karla Marks to debut sometime in 2017.