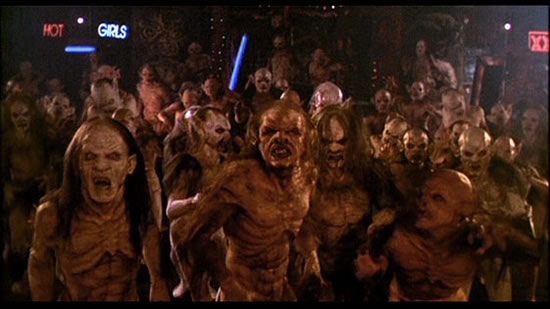 When it comes to horror flicks, I thrive on getting sucked into a good plot but most importantly look for well executed practical SFX Makeup. Here is the countdown of my personal top 5 horror films with outstanding SFX.

5. From Dusk till Dawn

Not sure if this film is considered horror but it did have its moments! Full of craziness and hilariousness that we will never forget. Not only were we introduced to the Gecko brothers but we experience what happens after dusk at a biker bar called the “Titty Twister.” The film had amazing SFX and very little CGI, which is something films today need to take note on.  Not to mention a noteworthy appearances by Tom Savini.  SFX team included Greg Nicotero and Robert Kurtzman.

This film has to be on the list as its one of my favorite Bruce Campbell performances. The SFX were over the top but totally done in all the right ways. I felt the second film in the Evil Dead trilogy was way better than the first with more action packed fun!  SFX team included Greg Nicotero and Robert Kurtzman.

Definitely the oldest film on the list and one of the most iconic in horror film history! If any person can spin their head around it’s  Linda Blair. The film featured fantastic acting, as well as groundbreaking SFX by the legendary godfather of makeup FX Dick Smith.

From the story to the iconic characters like “Pinhead,” Clive Barker has forever left us with a truly memorable film. “Demons to some, angels to others” really? By far the most original use of hardware nails we have ever seen. SFX courtesy of Nigel Booth, who also worked on Aliens, Bob Keen, David Keen, and Geoff Portass.

1. An American Werewolf in London

I’m a huge fan of werewolves and this film had some insane SFX Magic happening! Rick Baker who designed the films wolf hound put together by far, in my opinion, the best werewolf design yet. There were some scary and hilarious parts to this film. However, it was the story and the visuals that makes An American Werewolf in London my top horror film!

Thanks for reading! Keep up to date on what I am doing at the links below.

Editors Note: Tyler Green will be appearing at The Haunted Graveyard in Bristol, Connecticut on Halloween night. Three lucky entrants to the haunt will win a special zombie make-up application done by the Face Off star.