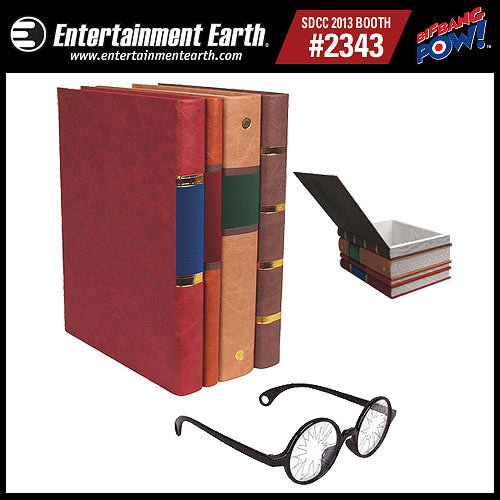 We received word of a Twilight Zone convention exclusive coming from Entertainment Earth.

Bif Bang Pow!'s third prop replica from The Twilight Zone! In the intriguing 1959 The Twilight Zone episode "Time Enough at Last," actor Burgess Meredith played badgered booklover Henry Bemis, a nearsighted bank clerk who found himself in the post-apocalyptic world following a nuclear attack. Henry may be gone, but you can take his place with the remarkable The Twilight Zone Henry Bemis Books Replica from Bif Bang Pow!. This marvelous reproduction includes a stack of Henry's precious books and a pair of actual glasses! The full-color book stack measures about 9-inches wide x 7-inches deep x 4-inches tall and opens at the top to serve as a storage box. The glasses feature Henry's signature black frames and thick, clear lenses. Also included is a removable/reusable film that can be placed over the lenses to resemble Henry's cracked-glasses, as seen in the end of the episode.