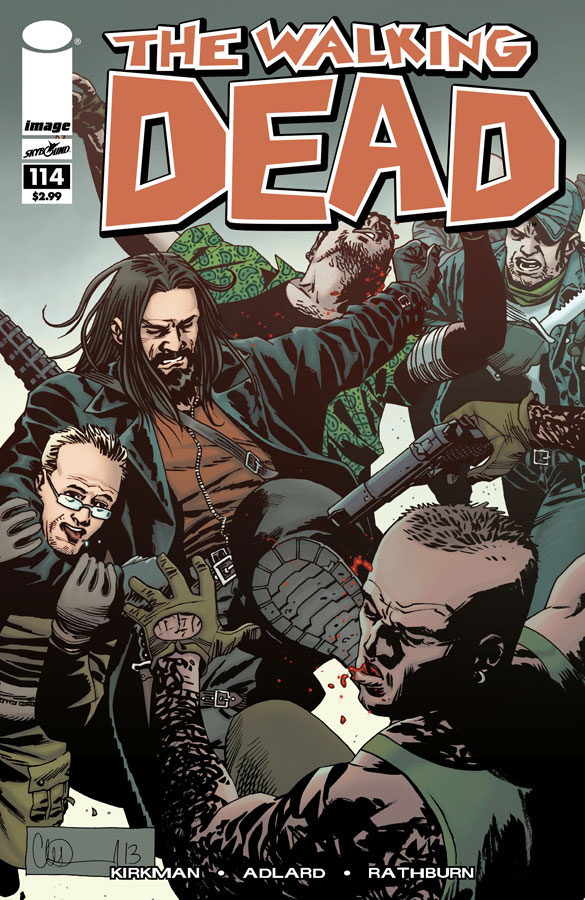 I do have to say, after years (and nearly a decade!) of enjoying Robert Kirkman’s storytelling pace in The Walking Dead comics, I’m finding the current saga somewhat perplexing.  Not that this engrossing tale should be told at a breakneck pace, because the entire prison series proved that a great story can prod along menacingly and never lose our interest.  And hey…..in this barren wasteland filled with murderous humans and hordes of zombies, it’s not exactly like the characters have something better to do.  But the coming Rick vs. Negan war had its fuse lit back in marvelous issue #100, well over  a year ago, and only in the current issue #114 (hitting store shelves on Wednesday, September 11th) do we have an official proclamation:  we’re going to war.

While I won’t spill the beans as to who utters this climactic battle cry, it should come as no surprise by the end of this issue.  In fact, Rick has been uttering this phrase for the better part of this last year yet somehow now it seems official.  When we last left the folks at Alexandria, Rick was about to witness Negan execute more of his men, Andrea was seemingly tossed out of the window of a tall bell tower while on sniper duty, and the Saviors had the upper hand on Rick’s group yet again.  So where does issue #114 pick it up?  I won’t give too much away but a couple of timely returns even the odds and Negan’s men feel the bite of the Hilltop and the Kingdom.  Surely this is the climactic battle we’ve been preparing for and were promised (in our minds, anyway)….right?  Not so fast.

One key element that really takes front-and-center in TWD 114 is further character development.  This is truly the first issue in a long time where ALL of the major players (good, bad and indifferent) seem remarkably “human”.  Of course, I’ve been accused of being a Kirkman fan-boy for just this reason but again his talent for developing and re-inventing characters shines through.  Carl furthers his descent into both darkness and adulthood simultaneously, for the first time addressing his father defiantly while no longer being given the kid-gloves treatment from Rick.  Jesus and Ezekiel prove that their tough-guy personas weren’t just hype, which begs the question of why these communities didn’t rise up against the oppressive Negan sooner.  A heart-to-heart talk between Jesus and Rick answers this question with absolute certainty.

One element that was easily picked up on is an eerie parallel to the TWD television show.  Rick and the others discover Andrea in the bell tower near death, and react with shock and grief much like Andrea’s controversial death scene in the final episode of season three.  In an effort to remain as spoiler-free as possible, I won’t reveal whether the ultimate outcome was also the same (you can thank me later).

Artist Charlie Adlard does a wonderful job of capturing the wide range of emotions, shock, fear, distrust, etc., that consume the faces of the major characters in this issue.  Perhaps the most glorious feat is the humanizing element drawn into Negan’s posture, and behavior.  For the first time, we are presented a picture of Negan with a genuine sense of fear as the situation escalates.  Negan has been shown to be increasingly more vulnerable throughout the “Something To Fear” storyline, and this twist seems to give others their first glimpse of hope that this is could be a winnable war.  But a war, it is.

Despite escaping death yet again, Rick is suddenly reluctant to push the issue.  This non-action may cost him, although you can’t help but think that this battle-tested sense of mutual respect that Rick and Negan share is at least partially to blame.  When the bond has been officially broken and the dust settles, who will be left to rule the living in the world of the undead?  Image Comics is really hyping the 10th anniversary of The Walking Dead with next month’s much-anticipated issue #115.  Knowing Kirkman’s flair for the dramatic in “big” issues (see issue #100), something tells me that next month we may very well have our answer.