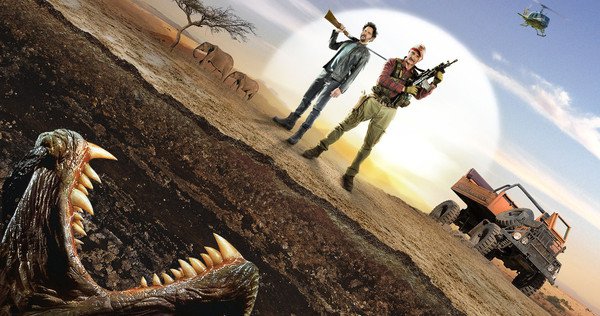 Tremors 6 Now Has A Release Date

Since the big announcement that Tremors part 6 was actually happening, horror fans everywhere have been clamoring for any new updates to feed their anticipation.  Specifically, when would this film be unleashed upon the legions of hardcore Tremors fans!  Well luckily, there was one star that couldn’t keep his mouth shut and had to share the big news.  Michael Gross, who plays the role of Burt Gummer in the first five films in the franchise as well as the short-lived television series, announced on his Facebook page on April 28th that Tremors 6 will be released on January 30, 2018.  This “leaked” news was welcomed by the horror film fanatics positively, with likes and comments in support of the announcement continuing to pile up.

While no official release date has been announced by Universal Studios, Mr. Gross can be considered to be a very reliable and trustworthy source of Tremors news.  Back in September 2016, he was the one who announced the pre-production of the anticipated sequel before anyone else (again, via his Facebook page.)  It is not yet known if the film will have a theatrical release, but right now the release date is believed to be for the Blu-Ray and VOD versions.

Tremors 6 is currently filming in South Africa, and will once again star Gross and Jamie Kennedy (Scream),who is also reprising his role as Travis Welker.  It will be directed by Don Michael Paul, who directed the last installment Tremors 5:  Bloodlines as well as other horror films such as Lake Placid:  The Final Chapter and the recently-completed Death Race:  Anarchy.

Stay tuned to HNN for further details on Tremors 6 as they become available! 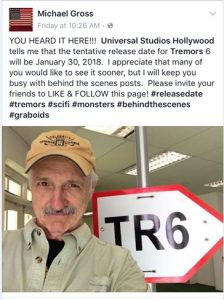