The ground may be trembling under your feet again very soon.  Universal 1440 Entertainment has just confirmed that Tremors 6, the latest installment in the horror comedy Tremors franchise, is currently being shot in Cape Town, South Africa, much to the delight of the faithful fans of the cult films.  It has also been confirmed that Michael Gross (Family Ties) and Jamie Kennedy (Scream) are returning to reprise their roles as father-and-son hunters Burt Gummer and Travis Welker.

Of course, Gross had previously let the cat out of the bag regarding the possibility of a Tremors 6 back in September of last year.  At the time, it was believed that two new Tremors projects were slated to begin (the other being a series on Amazon, which would see Kevin Bacon be involved in some capacity).  However, the announcement by Universal 440 Entertainment this week is the first official acknowledgement of the sixth installment in the Tremors lineage.  In the movie currently in production, Burt and Travis are working remotely when they come under attack by what is feared to be “weaponized Graboids.”  The film will also star Tanya van Graan (Starship Troopers 3, Death Race: Inferno) and Greg Kriek (Momentum).

Expectations are high that Tremors 6 will deliver the franchise’s signature action and excitement.  “This is going to be the craziest, most over-the-top movie in the Tremors saga to date,” said Glenn Ross, general manager and executive vice president, Universal 1440 Entertainment. “It takes the franchise’s signature combination of suspense, action and humor to new explosive heights.”  Don Michael Hall, who directed 2105’s Tremors 5:  Bloodlines, will be at the helm of this installment as well.

Tremors 6 will be released on DVD, Blu-ray, and Digital HD sometime in 2018.  An official release date is expected to be announced soon.  Stay tuned to HNN for details as they become available! 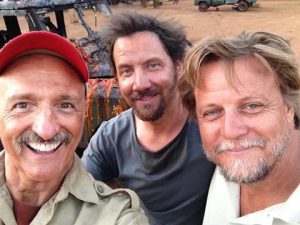