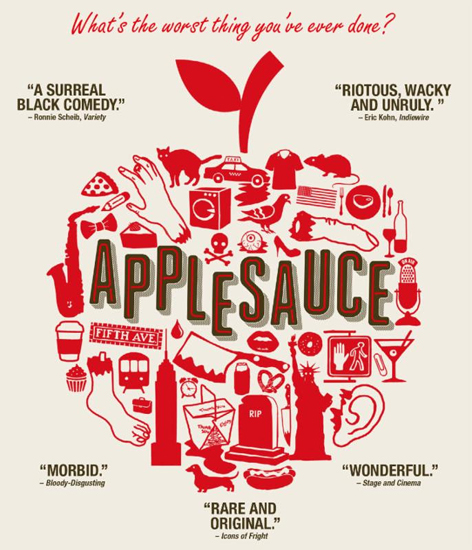 SOMEONE IN THE BIG APPLE IS INTENT ON BREAKING BAD IN

The Disturbingly Riotous Tale of Secrets, Lies and Severed Body Parts Comes to

In rising filmmaker Onur Tukel’s latest provocative comedy-drama APPLESAUCE, a married man is severely tested after a string of twisted, mysterious and frightening events. Following a world premiere at the 2015 Tribeca Film Festival, the enthusiastically reviewed film comes to digital EST and VOD from Dark Sky Films on November 24, 2015.

Every Tuesday night, radio talk show host Stevie Bricks invites his listeners to call in and share “the worst thing they’ve ever done.” Tonight, Ron Welz (writer/director Onur Tukel) is ready to share his story.  But soon after he confesses on the air, someone starts sending him severed body parts. Ron becomes paranoid, terrified. His life begins to unravel. His marriage begins to fall apart. He has no idea who’s tormenting him. Is it his insolent high school student? Is it his best friend? His own wife? In a city like New York, there are eight million suspects and each one could have a bone to pick with someone like Ron.

Take dark comedy, mix it with noir, add a original and unusual movies of the year.

Dark Sky Films is an independent film production and distribution label founded in 2008, working with emerging talent as well as established veterans to develop, package, produce and finance feature film and episodic television projects. Representing films from some of the most talented directors working today, such as Ti West’s The House of the Devil and The Innkeepers, and Jim Mickle’s Stake Land, Dark Sky continues to identify original talent and projects to bring a vibrant slate of films to the world market, with such recent productions as We Are Still Here, Deathgasm, Applesauce and Cherry Tree.