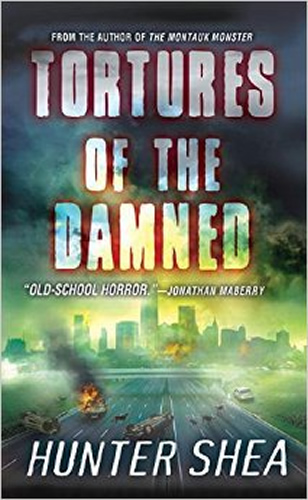 Tortures of the Damned Review

Tortures of the Damned Review

“The original Dawn of the Dead and Night of the Living Dead go hand-in-hand. I used to fantasize about what it was like if the world ended and what it would be like to have the run of the whole place!” – Author Hunter Shea on inspiration for TORTURES OF THE DAMNED.

Taking a different spin on the aspect of the apocalypse/end of the world style storytelling, talented author Hunter Shea (The Dover Demon and The Graveyard Speaks) brings you his latest descent into a realistic hell with TORTURES OF THE DAMNED. Creating the end of the world against the New York City skyline, Shea tells the story of two surviving families units, both different in many aspects but built on love and a strong family structure which differs from the usual horror family structure, within the locations of Yonkers, the Bronx and the surrounding boroughs of New York City. “I set it in Yonkers because it is very close to NYC, I know all the nooks and crannies but Yonkers is a very diverse and a big city. I live near to the Manhattan skyline and you know we are target. It’s always possible. However, the location dictated what they would come across with the dangers of the story” said Shea on the reality of the New York City backdrop and influence.

With danger imminent in this setting, Shea tells the tale of a terrorist attack on a routine day that causes not only mass deaths and destruction, but also the impact of animals that turn on the people and become a threat on many levels. “It’s very easy to infect animals and get them rabid,” said Shea. The results from both chemical warfare and an EMP bomb sends the world first into chaos, then into a state of decimation and finally recreated into the cave man days. “We are own worst enemies. I think any book that you write about the apocalypse or end of the world are always man doing something supremely stupid. I wanted to get things that could really happen like an EMP bomb, it makes it plausible, “said Shea.

Never allowing the reader to feel safe anywhere within the narrative, Shea invites the reader to find the connections with the experience and with each survivor as well as the choices they have to make. “You just can’t catch a break and you are on fight or flight 24/7,” said Shea of the journey. These choices and actions, whether on an individual as well as on a family level, are altered by their journey as the reader sees there is no safety and the different side of evil both by choice and necessity. The reader sees them adapt to this new reality. The book is also a sharp look in the mirror of what stupidity humanity will do and choices that continue to make us our own worst enemy.

Shea’s writing is potent with short burst chapters’ structure chronicling different storylines, perspectives and experiences. Shea expanded on that, “The Original title of the book was RUN LIKE HELL! This family and friends have to run like hell to find answers, to find help, to find safety, to find anything. These mini sprints create the marathon that is this book.” The structure of the story is strong and the description, while not overwhelming, is enough to paint a bleak, realistic and horrifying photo that parallels some of the best infection films created. The graphic use of the animals as a prime and unpredictable barrier is so smart by Shea who again is not afraid to take that safety away from anyone or anything in the book.  Shea also writes from a personal perspective in every aspect of the story especially the location, families and fears they face. Shea talked about that and the element of children in danger with the narrative, “Every time you jump into that character you have to be that person for however long! I have two daughters and I put all the things that I feared into those characters.”

As part of the reality and intelligence of the story, Shea challenges the reader to use their entire being to create debate and questions that may shake your beliefs through the actions, dialogue and results. He also challenges you to understand what true evil lies within when you have lost everything and can play a god? Are all people bad or is it the circumstances that drive us to those choices? This question especially I asked myself as a reader and interviewer? Shea touched on that and his mindset of human nature, “I like to think they’re good people out there but if you strip away everything, I worry about those good people and what they would do to survive and if they do survive what do they become.”

Overall, TORTURES OF THE DAMNED is one of the most heart-wrenching, tense and engaging horror literature reads this year! The characters are profiles of you and me regardless of  beliefs, race, creed, color or nationality. The reader also will find no shelter as the pace and visceral aspect holds you captive from the first page where we are introduced to life before the attack, through the stay in the bomb shelter to the final page where we see who has been changed, survived and how that human monster does not change even under such horrifying circumstances.

TORTURES OF THE DAMNED twists the apocalypse book genre in a direction that will shake you to the core and leave your fantasies of being the last man alive in those dark corners that we dare not allow to consume us. Who can you trust? What is around the corner and now dangerous? What would you do especially if you knew there may be no tomorrow? Are humans or the animals or the earth the true monster? Conflict, tension, danger, emotion and reality are unfolded in the pages of TORTURES OF THE DAMNED available right now from Pinnacle.

Listen to the full conversation from the Horror Happens Radio Show at www.Horrorhappens.com with Jay Kay!