Too Much Horror Business interview with Kirk Hammett

Everyone knows Kirk Hammett as the stellar guitarist for Metallica, but not that many know Kirk as an avid horror fan and collector, with a genuine passion for the genre. Sr. Editor Christine Caprilozzi recently sat down with Kirk to talk about his new book, “Too Much Horror Business,” his vast knowledge of horror history, and the “darkside.”

Horror News Network: I’ve read the book and you have an insanely amazing collection, especially for hardcore horror fans. In the book, you mention you were much more intrigued by horror films than Disney. Most of the time when kids are interested in something, they gravitate towards the trend. You seemed to dig deeper into the origins (“Freaks”, “Frankenstein vs the Werewolf”). What made you go towards the classics and not just your contemporary horror scene?

Kirk Hammett: Good question, I haven’t given that much thought. When I first started watching these horror movies in the late 60’s early 70’s, a lot of times it was just what was on television, “Creature Features.” I would just watch whatever the programming was. Every Saturday night they would run two horror movies, and a lot of the times it was just the old classic Universal stuff, “Frankenstein,” “Dracula,” “Island of Lost Souls,” and “The Raven.” That just shaped my whole aesthetic. I found myself gravitating and embracing that stuff. At that time, a lot of the horror movies coming out were the Hammer films. The problem was you had to go to the movie theater, and a lot of times I just didn’t have the resources to go. I just relied on whatever was on the television. I can remember waiting for the new TV Guide to come. The first thing I would do was go through every single page searching for horror movies to check out and I would make a list of horror movies I wanted to check out. I was always into the horror genre as a whole, but the classic Universal films just resonated with me.

Horror News Network: Yeah, in the book you have some really old classic pieces from the very beginning of film history, which are really unique.

Kirk Hammett: I tried to be really comprehensive in the book and start from the earliest times, basically the “teens.” A lot of that early work is what I really have a passion for.

Horror News Network: Horror comics are near and dear to our hearts here. In your book you mention the first one you picked up was “Creepy.” Do you still collect horror comics?

Kirk Hammett: I’m aware of them, but I really just stick to reading the comics I have in my collection. I like revisiting the stuff I loved as a kid. I loved the old EC Comics, “Tales from the Crypt,” and “Vault of Horror.” I’m aware of a lot of the new horror comics, unfortunately I never have time to get to the comic shops, so I’m a little guilty of not keeping up with all the horror comics.

Horror News Network: Let’s talk about your horror toy collection. You have some really obscure pieces. Is there one that stands out for you, or as your favorite?

Kirk Hammett: Yeah, “Monster Plaques.” They were sold during the 1960’s and are really, really rare. I mean, I’ve come across three of them in the last twenty years. I actually found one in its original packaging, and to have that as a collector is amazing, like the “Holy Grail.” I can tell you any of the toys you see in the book in the original boxes”¦ that to me is the ultimate.

Horror News Network: That leads me to my next question. You have a line of toys coming out, can you tell us about that?

Kirk Hammett: Yes! Its KVH toys (www.kvhtoys.com). There’s a persona of me I call Kirk Von Hammett, which is basically myself dressed up as a ghoul with fangs. That’s going to be our first toy”¦ it’s going to be a toy figure of me as “Kirk Von Hammett.” We’re also going to branch out and do other figures based on the lesser know characters in horror films. We’re not going to do a “Dracula,” “Frankenstein,” or “Creature from the Black Lagoon” stuff that everyone else does. Don’t get me wrong, I love all that stuff, but we’re probably going to do a figure based on Boris Karloff from “The Black Cat.” I have the actual outfit from the movie, which is in the book. We’re also going to do Bela Lugosi from “White Zombie,” and a “Nosferatu,” which is being worked on now, and looking really great. It’s going to be my chance to do a lot of characters that I always wanted to have a toy of, but no one ever took the initiative to make. I’m really psyched about that aspect of it.

Horror News Network: In the book you call yourself a “historian” and a “curator.” Have you ever thought of opening a true horror museum because you have such a comprehensive collection and so much knowledge? The collection in the book is amazing for horror fans.

Kirk Hammett: The thought has crossed my mind. I definitely know my shit when it comes to horror. (laughs) I really am obsessive compulsive about this. Even laying out the book I was very particular about what movie posters needed to go with other movie posters on each page.

Horror News Network: You’re so into horror and Metallica is also a very dark band. Not only the lyrics, but also your guitar riffs and brooding tones are pretty grim. I remember the even seeing the first Metallica video, “One” thinking “this is f-ing creepy.” You’re very laid back, what draws you to that “darkside?”

Kirk Hammett: I’ve always had a penchant for things that were darker. I mean when I watched horror movies as a kid, the best part for me was the monsters, the creatures, the villains. I guess it was easier for me to relate to that than the lighter, airier type of things. Walt Disney really didn’t do it for me. (laughs) ….not like George Romero did. That’s speaking from an 8 year olds point view. It’s the same with music. When I was younger, I wasn’t interested in Top 40 music. I was always interested not in music in major keys, but minor keys.

There’s a note sequence that’s called the “flatted fifth.” It’s basically a progression that when you play it, it sounds really evil. It was actually banned by the Catholic Church for like hundreds of years.

Horror News Network: Ha, and you play it all the time.

Kirk Hammett: Yeah, Metallica as a band, that is one of our favorite movements, as they say. I’m waiting for this stuff in my psyche to go away, but I’m pretty sure it never will.

Horror News Network: What stands out as your favorite horror film?

Kirk Hammett: That’s a hard one, and I answer it differently every time. Some of mine are “The Cabinet of Dr. Caligari,” “The Bride of Frankenstein,” and I love the “Abbot & Costello meet Frankenstein.” I love the cheesier 1950’s films like “Invasion of the Saucer Men.” One of my favorites is a movie that came out in the early 1970’s called “Equinox.” It was a great movie made really cheaply by a couple of college students. So, I have many favorites.

Horror News Network: Thanks for taking the time to chat with us Kirk! “Too Much Horror Business” is out now. If you’re a horror collector, or just hardcore horror fan, you should check it out. 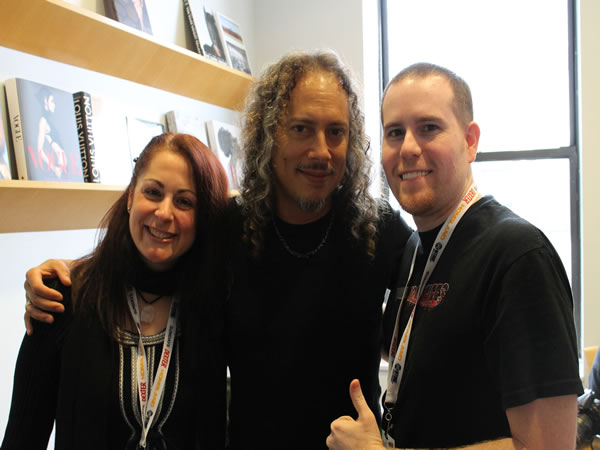