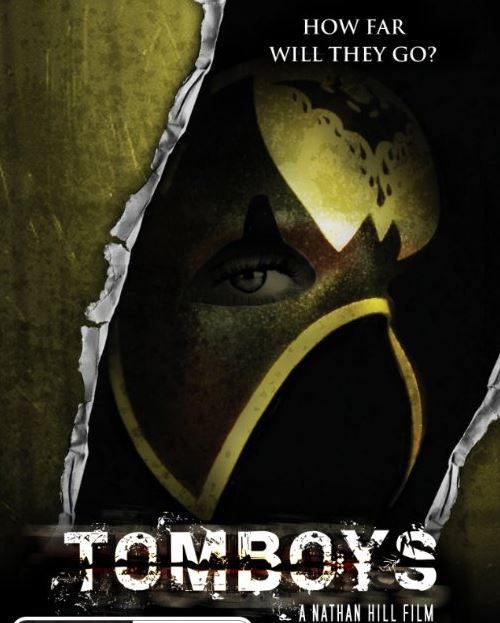 What happens when a group of bossy chicks take the law into their own hands when the legal avenues of justice fail them?  The result is 2009’s Tomboys, directed by Australian Nathan Hill.  While the idea of vigilante justice in cinema is nothing new (see the Death Wish series, and to a much lesser extent Death Sentence and Law Abiding Citizen), Hill’s spin on the end result is certainly noteworthy.  And the fact that the cast of aggressors were all female, also, cannot be discounted.  At once original and engaging, Tomboys nonetheless does fall into some cliche dramatic devices and tends to drag a bit too much for its own good.

Tomboys begins with Kat (Candace Day), a victim of sexual abuse and repeated rape, and group of five females in a dungeon-like environment.  While continually bickering over their plans, methods, and how to successfully enact their plans of revenge on Kat’s serial rapist, the kidnapping slowly devolves into counter-accusations and mistakes that force the women to question each other’s motives.  There are several plot twists, which for the sake of spoiling this film (even though it’s been available on the international scene for five years now) I won’t divulge here.  But indeed……the best laid plans of mice and men, etc.  The very first rule of a kidnapping, regardless of intentions, is to make sure that the correct person has been taken.  The anonymous foreign ringleaders from all of those Liam Neeson Taken movies seem to understand this….before their inevitable demise, that is.  But as the story progresses, you do get a sense of a sick kind of justice taking place, justifying the gruesome actions of the group.  Though inept, these women are truly characters you can get behind as their intent is noble.  The way they get there, however, leaves a bit to be desired.  Keeping secrets from the others isn’t the way you won’t to go into a group crime, as trust has already been thrown to the curb.

Tomboys has its faults, but it’s not without its charms either.  This film has a gritty grindhouse type of feel to it, though there is little in the way of comic relief to bring levity to the overwhelming sense of dread.  There are gruesome scenes aplenty, enough to satiate the normal film-gore enthusiast.  The subject matter is heavy, obviously.  Sexual assault is nothing to take lightly, and its treatment here is basically a fantasy scenario for anyone who’s ever been victimized.  But that may be my fundamental issue with Tomboys.  Hill’s heart is in the right place, but the depiction of a strong group of avenging women seems to quickly unravel in very stereotypical ways.  Keeping important secrets from each other, secretly harboring feelings of resentment towards the others….these all play right into the hands of the unfair portrayal of the weak, disloyal woman.  Each character has their own sense of when “enough is enough”, and altogether what started as a just cause turns into yet another violent crime.  Not to say that turning the other cheek is always the path to follow, but each situation needs to be assessed accurately.  Our heroes were never on the same page, and unfortunately this cost them their chance at redemption.

Overall, Tomboys is a morality tale that warns of dire consequences on both sides of the crime.  What you can take away from the film, most of all, is that crime never pays, and sometimes seeking revenge is worse.  Hill does create a good picture here.  Just stick with it through the dragging and finger-pointing…..you may just be glad that you did.