Wrestlemania 37, which went down this weekend at Raymond James Stadium in Tampa, FL, was an important event in the entertainment world for several reasons.  It was not only the first event held by the WWE outside of their indoor “Thunderdome” set up in over a year (and first major event produced solely for the Peacock app), but it was also the first held in front of a live audience in that time as well.  Over 50,000 wrestling fans filled the stadium for the annual pro wrestling extravaganza, and in the opening match of night 2 on Sunday horror fans were treated to something special in their wheelhouse as well.

The FX and design specialist team at Callosum Studios collaborated with legendary SFX and makeup artist Tom Savini to create the sick “new” mask worn by The Fiend, Bray Wyatt, in his shocking loss to “The Viper” Randy Orton.  But really the loss can be pinned on Wyatt’s female disciple, the once-wholesome Alexa Bliss, who pulled a big-time swerve on The Fiend wearing a ghoulishly-bleeding headpiece causing black ooze to drip down her head and onto the oversized jack-in-the-box which served as Wyatt’s entrance just a few minutes earlier.  The mask, the bleeding crown, the jack-in-the-box…..all joined together to create an eerie and memorable moment that will have wrestling and horror fans talking well past the final bell.  And the group at Callosum Studios, overseen by Mr. Savini, are the ones to thank for this incredible visual.

Callosum owner, Jason Baker, tweeted out the news (below) to recognize his team in creating one of the creepiest Wrestlemania moments in history (sorry, Mr. Calaway).  The cherry on top is the involvement of Savini, who has been a huge part of creating The Fiend character going back to his “debut” in July of 2019.  Savini has overseen each mask worn by Wyatt both in-ring and during those killer Firefly Funhouse promos on WWE TV, including the more recent “burnt to a crisp” version which made its first appearance at last month’s Fastlane pay-per-view.

Baker even found time to leave his mark on another part of Wrestlemania 37, as he and his team were asked to dress up the show’s hosts, superstars Titus O’Neil and Hulk Hogan, like pirates.  They nailed it, and Baker showed his appreciation for the opportunity on Twitter as well.

Tom Savini and the team at Callosum Studios have a good thing going with WWE and “The Fiend” Bray Wyatt.  Even if you’re a horror fan but not into pro wrestling, you have to appreciate the awesome spectacle this relationship has created!  Let me in! 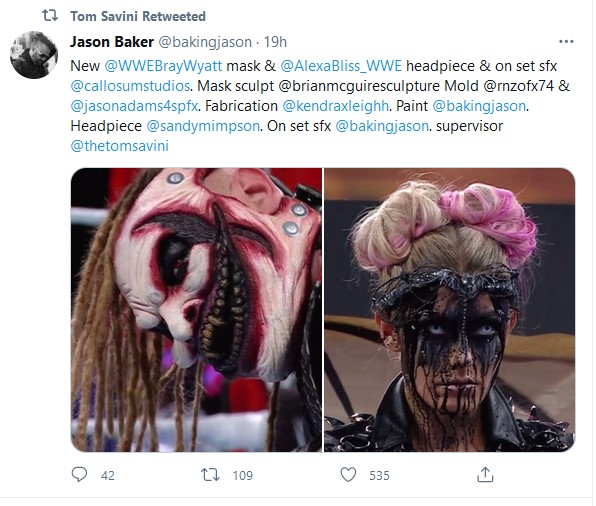 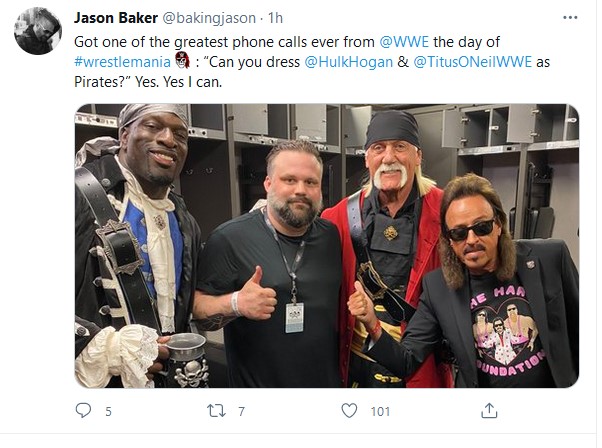 Rest in Peace: George A. Romero Dead at 77