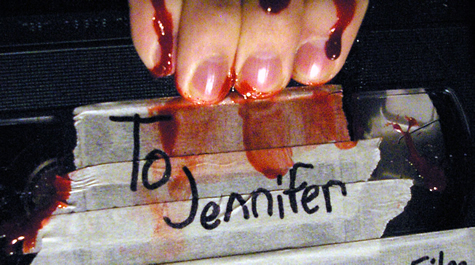 Synopsis:
Joey suspects his girlfriend of two years, Jennifer, is cheating on him. He is so convinced that he enlists the help of his cousin Steven to create a Video Diary of his attempt to catch her in the act as well as to document the heartbreak she is putting him through. In an attempt to make her feel guilty, he intends to give this tape to her "

Our Thoughts:
James Cullen Bressack’s thriller To Jennifer is an interesting examination of the intersections between obsession, psychosis, and technology. Shot entirely on an iPhone 5, To Jennifer appears on the surface to be part of the found footage/mockumentary/ Catfish-style real fake genre so prevalent in contemporary horror. Actually, the film has more in common with Jim McBride’s 1967 self-reflective biography David Holzman's Diary. Both films deconstruct the theory that cameras and filming dehumanize, when it’s really the human beings behind and in front of the camera that use the medium to control and degrade themselves and each other. Joey starts out as a sympathetic cypher, broken hearted and still pining after his deceptive girlfriend Jennifer. Yet the more he speaks, his eyes darting, a seething rage behind his rejected, vulnerable affect, the more the viewer identifies with the absent Jennifer. Chuck Pappas brings a Ted Bundy-esque intensity to the role of the increasingly desperate Joey. His need to state his case both in person and on camera fuels his sense of righteous paranoia. Joey is a Patrick Bateman for the Facebook generation, sweetly skyping his worried mother one minute, hysterically breaking down and screaming his lungs out at the camera the next.

The film looks great, a definite endorsement for the filmmaking resources and distribution options available through cell phone apps. The script goes off into some weird tangents (Pixie the transvestite hooker?) and the dialogue seems hung up on trying to out expletive Quentin Tarantino and Rob Zombie combined, but there is a verisimilitude to the presentation of this romantic or stalker situation that works. Some sequences in To Jennifer walk the thin line between padding and suspense (the end scene feels like it was filmed in a condo with the endless dimensions of the TARDIS), but Bressack does give the viewer a pay-off. To Jennifer may be rough around the cell phone screen, but James Cullen Bressack is a filmmaker to keep an eye on. Or follow on Facebook. Or Twitter. Or Instagram. Or Pinterest. Or iTunes…