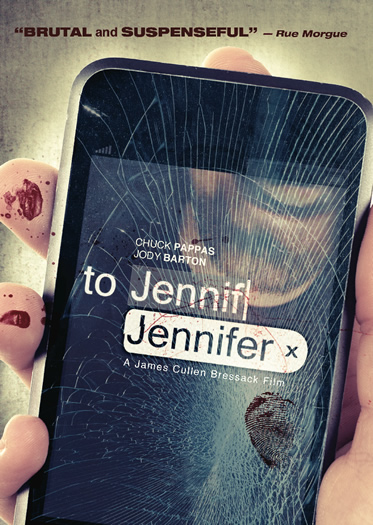 TO JENNIFER Coming in October

“TO JENNIFER”, the first feature film shot, edited and distributed on the Iphone 5 finally has a release date as well as DVD artwork.

The film is set ot be released on DVD and VOD on October 15th the same day as Bressack’s other film HATE CRIME (being released by UNEARTHED FILMS).

This is the third feature film by JAMES CULLEN BRESSACK, the writer and director of the film HATE CRIME. Shot entirely on the iphone 5, “‘To Jennifer” stars Chuck Pappas, Jody Barton (Hate Crime), Jessica Cameron (Silent Night), Maria Olsen (Paranormal Activity 3) and James Cullen Bressack and features a cameo from American Mary’s Tristan Risk. The film is being produced by Bressack, Pappas, and Jarret Cohen under the Psykik Junky Pictures umbrella.

Synopsis:
“Joey suspects his girlfriend of two years, Jennifer, is cheating on him. He is so convinced that he enlists the help of his cousin Steven to create a Video Diary of his attempt to catch her in the act as well as to document the heartbreak she is putting him through. In an attempt to make her feel guilty, he intends to give this tape.”