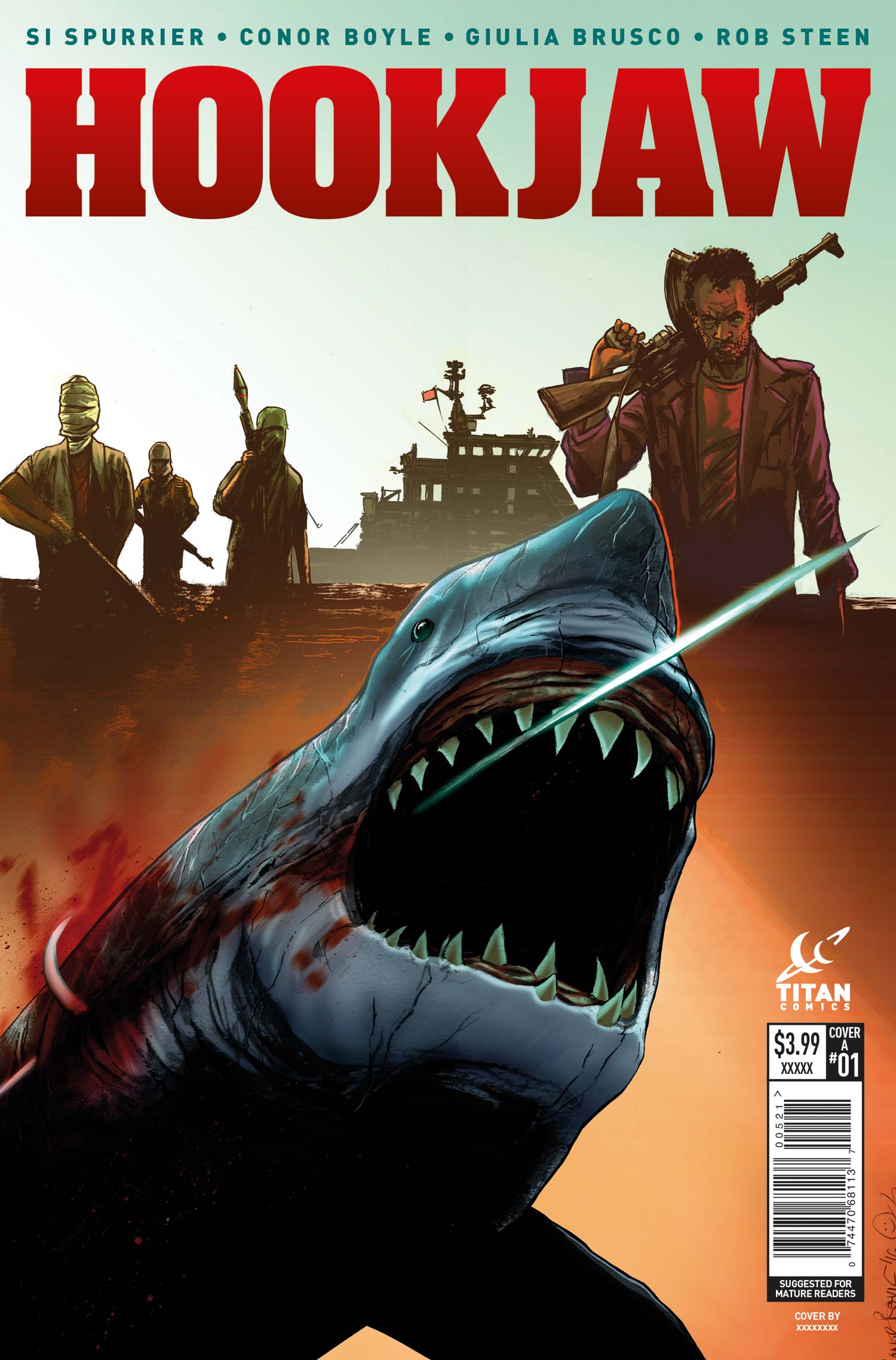 The world changed in 1975 for fans of horror movies (and for sharks for that matter). Spielberg’s Jaws transformed the film industry and forever scared people out of the ocean in 1975, and not surprisingly, the inevitable rip-offs that followed failed to capture any of the quality or story-telling aspects of the original summer blockbuster.  This didn’t slow down the Hollywood machine however, as every aquatic creature (Orca, Piranha) and land animal (Grizzly, Alligator) got a shot at cinematic fame and fortune.

Hollywood producers weren’t the only ones that tried to replicate the success of Jaws however.  UK Publisher IPC decided to capitalize on not only the success of Jaws, but every film that appealed to a young male action film audience with their weekly anthology comic book entitled Action (talk about truth in advertising…) 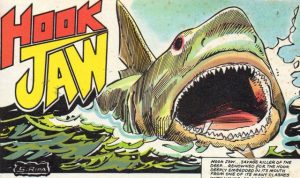 Action featured thread-bare copies of not only Jaws, but also Clint Eastwood’s Dirty Harry series, Rollerball, and a slew of World War II stories.  The one story that resonated with readers (and parents) despite this obvious marketing ploy was the shamelessly titled HookJaw (get it? Drop an “S” and add “Hook”).  Before the “Video Nasties” gained fame throughout the UK and abroad, conservative parents banded together to get the title pulled from newsstands and the publisher caved, sanitizing the content and allowing the “shark with the hook in his jaw “ to sail into the sunset, never to be seen again…

Or so we thought.  Although Action would be absorbed into another British comic magazine entitled Battle Picture Weekly, and the creative forces behind the original title (Pat Mills and John Wagner) would go on to create the highly influential 2000 AD, that environmentally conscious shark just wouldn’t go away.  Just when you thought it was safe to go back into the comic store, Titan Comics has brought ‘ole HookJaw back to the surface in the form of a new series written by Si Spurrier (X-Force) with art by newcomer Conor Boyle. 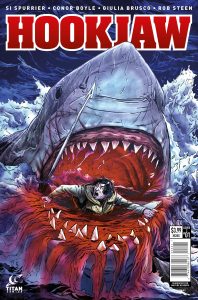 Spurrier does a nice job of grounding the story in reality and in a present day setting.  He also walks the fine line between showing the shark too much and allowing the human characters to drive the narrative (especially in the first issue of a new series).  He succeeds by making the marine scientists the focus of the tale and they give the reader all of the information they need to set the stage for the inevitable shark attacks to come.

He also works in topical problems and environmental concerns which original writer Mills incorporated into his stories from the 1970’s.  This time the problems revolve around conducting research off the coast of the pirate-infested waters of Somalia, an overzealous SEAL rescue team, and an ocean littered with oil refineries.

All of this is, of course, just set up to get to the main attraction (Hook Jaw) and Boyle does a fine job of displaying just the right amount of grisly shark carnage to wet our appetite for future issues.  Speaking of the title “character”, HookJaw actually communicates his thoughts to the reader in a unique fashion, which sounds ridiculous on the surface, but the creepy narration demonstrates how he sees his world and what is and is not supposed to be in it.   With additional supplements at the end of the story about the history of the character and scientific information about real sharks (“Get Ready for Action” and “Great White 101”), Titan if off to a solid start, effectively introducing HookJaw  to a wider audience and satisfying original fans of the UK legend.